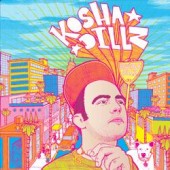 While Spring leaves us and summertime takes us by storm, or by sweat, many of us will be pitching tents, dancing for days, and taking life-changing road trips. Others of us will stay right here behind our computer screens. Regardless of your summer plans.

This summer, the Bonnaroo Festival continues in its tradition of an excellent, varied line-up, including Neon Indian to Manchester Orchestra!

Dillz and Diwon won't be able to make it to Bonnaroo this year, since the Brooklyn and New Jersey kids will be globetrotting through out Europe, but they decided to release some remixes for their festival friends, via their FREE Bonna Rhymes album.  The mix includes LCD Soundsystem, Gwar, The xx, Miike Snow and more.

If you don't get down to Shakedown Street in Manchester, Tennesee, this year, be sure to download this amazing rendition of Dillz and Diwon's Bonna Rhymes, that will have you sweating at the desk of your 9-5 while you read twitter feeds from the best place on earth, and save yourself a couple hangovers and a few hundred bucks.

Kosha Dillz's Beverly Dillz album hit stores today! It's his amazing follow up to his collab "Freestyle Vs. Written" record with C-Rayz Walz. Click to Buy CD or to Download. Dillz is currently on tour with Matisyahu playing sold out shows every night, so check the schedule and come say what's up!

Now for a free download of the albums second single, "L.A. Ish" and some info on the album:

Beverly Dillz, his solo red carpet debut LP, was recorded entirely in the Beverly Hillz section of Los Angeles, while the lyrics were composed at various overpriced coffee houses and internet cafes through out the city. A frequent maker of history, Kosha Dillz will attest to rhyme the first song in Hebrew on an American indie album, "Kol Ha Kavod Lirkod (its all good to dance)". And for those who don't speak Hebrew, songs like "Dilly Wonka" and "LA Ish" will keep you dancing from the happy go -rich lounges of any US city to the pretty sides of your local dive bar, any day of the week.

Pick up your copy of Kosha Dillz's "Beverly Dillz" album!

"an uptempo, synthesized introduction to a spiritual fast life of the Hollywood underground via Garden State perspective, sprinkled with a touch of unorthodox "kosher" heritage and culture." CLICK TO BUY NOW

Buy The Album Now One Month Before it Hits Stores and receive a FREE copy of the Modular Mixtape!

- Indie hip-hop icon C-Rayz Walz teams up with fresh-faced, yeshiva-trained wordsmith Kosha Dillz for twelve tracks that mix freestyle and written rhymes, classic and new-school beats, and the frantic, fast-paced energy of a single, manic 24-hour recording session to produce, yes, "Freestyle Vs. Written," the first collaboration of its type. CMJ writes, " it's both a statement of cultural solidarity and creative open-mindedness."

GET IT ON ITUNES

So you all know C-Rayz Walz. Some from his MTV appearances, some from his freestyle world championships, others from his Def Jux releases with El-P and Aesop Rock and some of the yids just know him from his songs with Matisyahu and SoCalled. Well, C-Rayz teamed up with Kosha Dillz for what is one of the coolest indie hip hop albums we have ever heard.FREESTYLE VS. WRITTEN on Modular Moods/Shemspeed.

To Find Out & Hear more, go to

".creates fresh narratives that aim to critique national celebrations (“Holiday”), provide an observation of a trend (“The Evolution of Fan”), and detail the complications of dating while experiencing cultural pressures."- URB MAGAZINE

"With his new CD - . he hopes to teach the rap community that hip-hop transcends racial and religious boundaries." The Boston Herald

"downright solid and could be compared to Termanology without the Latin flare. he clearly has a business-minded attitude that can bring him great success in this industry. "- Rap Reviews

Half A World Away (prod. by Ski Beatz)

Kosha Dillz "Where My Homies Be" (Feat. Gangsta Boo and Murs)