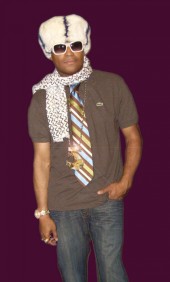 Location:
New York, New York, US
Type:
Artist / Band / Musician
Genre:
Rap / Hip Hop / Alternative
Site(s):
Site
Label:
DMAFT Records
Type:
Indie
BioConnections
Shopaholic
Kool Keith comes in many forms and many incarnations, but his style is distinctly his own. Just as there's no mistaking his smooth lyrical delivery, his unparalleled imagination, and searing hip-hop prose with its underlying edgy beats, there's no denying the incredible force of power that is Kool Keith. Whether as a founding member of the legendary Ultramagnetic MCs, or in the guises of his renegade rap personas that include Black Elvis, Dr. Octagon and Dr. Dooom, Keith has established himself as an innovative lyricist whose raps stretch the envelope to the limit while exciting and entertaining the listener.

Kool Keith, nee Keith Thornton, first emerged as part of the legendary New York crew, the Ultramagnetic MCs. At a time when rap was slowly making the transition from B-Boy braggadocio to a more aggressive, politicized stance, the group quickly established themselves as lyrical innovators with such classics albums as Critical Beatdown, Funk Your Head Up, the Four Horsemen and later The Best Kept Secret.

Kool Keith launched a solo career and through his various releases he explored his many sides, from the playful to the downright carnal, releasing such independent records as Kool Keith's Sex Style, Dr. Dooom's First Come, First Served and the on-going Lost Masters series. Kool Keith was one of the first artists to embrace Independent distribution as a means of creative freedom and personal integrity. In addition to his many rap outings and his infamous Dr. Ultra appearance for Sprite, Keith proved he was not averse to cross-genre experimentation and has collaborated with a wide array of artists, from the Prodigy album Fat Of The Land as the voice of "Smack My Bitch Up" and on the track "Diesel Power" to a recent collaboration with Tom Waits.

Keith himself is not one to look back at his vast eclectic body of work, "I'm not about nostalgia, I'm not about looking back. If I made a hit, I moved on and never looked back the future is what I should be dwelling on right now." - Kool Keith

This Profile Was Created by ILLUSTRASHION DESIGNS!

Kool Keith: NY Messed Up & Ran From Their Sound