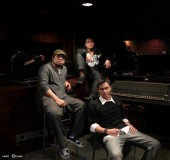 The product of four complex personalities, Kwjan’s is the result of the combined talents of Abaya, Kelley Mangahas (bass), Jorel Corpus (guitar) and J-hoon Balbuena (drums). They were joined in 2004 by Boogie Romero (guitar), another high school friend and former band-mate of Marc and Kelley, soon after the release of their self-titled debut album.

The five high school friends have crafted material that draws from 90s rock and infuses it with a modern attitude to make it very much of-the-moment. It’s a sound that draws inspiration equally from creative tension and the shared brotherhood that bonds the members. While less bands would fold and self-combust due to the stress, Kwjan flourishes, holding on to its status as one of the local rock scene’s most intense artists.

Three years later, at the height of the new music renaissance, Kjwan braved a second album, 2StepMarv, which promised to be so many things more than their first self-titled album.

If the first album had been a simple matter of coming out, the two-year journey of making 2StepMarv was a more complicated matter of growing up—musically. They were able to craft better songs, hone their individual skills, introduce new musical elements to their primarily rock sound, and in general, just put more thought, heart and soul into the new music. They became comfortable in their new skin.

The band likewise built a loyal following around the rest of Asia, a result of hard touring and memorable performances around the region. In 2007, Kwjan headlined HK-Live, Hong Kong. HK-Live is a monthly showcase of the Hottest Acts around Asia in HK’s Fringe Club. The boys also participated in Singapore’s Annual Baybeats Music Festival.

Kwjan band’s biggest breakthrough yet was its grand prize victory in the Asian leg of the IKON ASEAN competition in Putrajaya, Malaysia. The band gave the crowd a red-hot serving of rock n’ roll, served Pinoy-style and bested 30 other acts from the Southeast Asian region. The victory even earned the band a Citation from the Philippine senate, asserting that Kwjan isn’t only winning fans and kudos from the rock scene.

In February 2009, after a break, Kjwan once again burst into the scene with the release of their blistering third album 13 Seconds to Love. The album is exclusively embedded in Nokia 5800 Xpress Music units, making Kwjan true purveyors of music technology.

The year also saw the parting of ways with Jhoon Balbuena and Jorel Corpus who decided to pursue further studies in the United States.

After its July 2009 release, Kjwan's latest offering “13 Seconds To Love” in CD format under MCA music Philippines, spawned four 1 Singles such as "Lifeline", "13 Seconds to Love", "Pause" and the most recent one "Meron Ba".

The guys of Kjwan are currently in the process of recording their 4th Studio album and are excited to share it soon to the world. Add the band on twitter (kjwanmusic), Check out their Facebook account and stay updated here in Myspace.