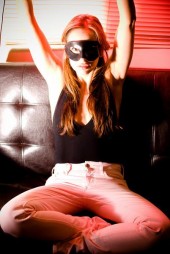 You can also buy debut album "HUMAN STEREO"Available on iTunes!

Capturing the attention of many different musicians, Kid Moxie has worked with artists around the world on various remixes of songs from "Human Stereo" and "Selector". Serafim Tsotsonis' remix of "Champagne" appears on the Hilton Hotels compilation Press R for Galaxy Bar, released by KLIK Records, while his remix for "Tsunami" is on heavy rotation on European radio stations.
Kid Moxie's song "Ma Romance D' Hiver" was featured on SHOWTIME's hit TV series "The L Word" in its season 4 premiere. The video for "Hollywood Smile," along with "Tsunami" are currently airing on rotation on MTV/Logo TV and won a slot on Logo's Top 10 Videos for March '09. Songs from Human Stereo and Selector are being played on radio stations globally, from Greece (Best FM 92.6 in Athens, Greece) to the UK (Robo Cast Radio, BBC) to the US (Hunnypot Radio, WomensMusic, KXLU, Los Angeles). Kid Moxie has been featured in numerous magazines in U.S and Europe such as VOGUE (Greece), Curve Magazine (U.K), Diva Magazine (UK - August '08), Lifo, Vima, Status and Monopolis Magazine in Greece.
Elena was just nominated for Women Of The Year by Life and Style Magazine in Greece for her international career in acting and music.

Papercut ft Kid Moxie: Not the End (Studio Session) [The Sound Of Everything]