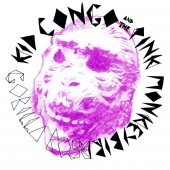 Tag(s):
Kid Congo The Pink Monkey Birds
Location:
Dupont Circle, US
Type:
Artist / Band / Musician
Genre:
Alternative / Other / Rock
Site(s):
Site
Type:
Indie
BioConnections
Nick Cave & The Bad Seeds
In The Red Records
The Gun Club
Dead Combo
Little Annie
Optimo Espacio
New Album "Gorilla Rose" out March 2011 on INTHERED Records
Gun Club co-founder. Gunslinger for The Cramps. Six-string stylist for Nick Cave and The Bad Seeds. The legendary Kid Congo Powers titles his new album on INTHERED Records GORILLA ROSE after artist/performer Gorilla Rose. As a teenage boy Kid met Gorilla thru seminal weirdo band, The Screamers in the emerging LA Punk music scene of the 70's. He recalls, "Gorilla Rose was a close and constant presence and influence on The Screamers and me as a young pup. He was to The Screamers like Bobby Neuwirth was to Dylan, a jester of sorts, sparking many of their great lyric ideas. I still think GORILLA ROSE is the most fabulous nom de plume in history. His unsung specter had been in my mind a lot last year so I decided to title the album GORILLA ROSE to honor his name and bring him into rock n roll's ongoing conversation." While editing his fan club newsletters at a haunted Hollywood house, a teenage Kid Congo was also exposed to the sounds of Neu, Nico, Billie Holiday, and the "Susperia" movie soundtrack by Goblin. Along with Gorilla and Kid's Garage rock pedigree, these past influences found their way back into his new album.
For GORILLA ROSE Kid Congo and The Pink Monkey Birds grabbed producer Jason Ward and hightailed it back to the magik gymnasium at The Harveyville Project, a high school in Kansas and also the scene of the crime of their much acclaimed 2009 release "Dracula Boots." Kiki "El Coyote" Solis on bass and Ron "The Cap'n" Miller on drums along with, new Pink Monkey Bird, Jesse "The Candyman" Roberts (from Seattle's The Ruby Doe) on guitar, keys and vocals firms up Kid Congo's squawking flock. Brandishing 13 all original glam-tastic compositions, GORIILA ROSE blasts off with the explosive dance anthem "Bo Bo Boogaloo" wearing their 60's Chicano Rock influence on their sleeves. Shake it don't break it! That's just the start of a wild ride thru funky but chic decadence ("Goldin Browne") slip sliding rockabilly ("Hills Of Pills") ,Teenage punkdom ("Our Other World") mystic Kraut rock ("Bubble Trouble") , baby-making sleaze ("Catsuit Fruit"), the best bad Peyote trip you ever took ( "Injun War Crimes.") and even a velvety call from the beyond (Lullaby in Paradise).
Finding inspiration in the past is what Kid Congo and The Pink Monkey Birds do best. On this 2011 sonic trip, Kid brings his past into the present and names it after someone flamboyant and inspired. GORILLA ROSE.
.www.kidcongopowers.com.
.U.S. Booking Contact:
Todd Cote at Leafy Green Booking
todd@leafygreen.com
http://www.leafygreen.com.
EU Booking Contact: http://www.myspace.com/uturntouring
Follow @kidcongopowers