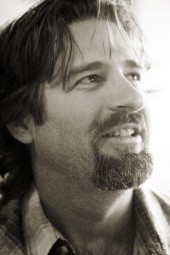 Kevin Montgomery grew up on Nashville's Music Row, as a child of parents whose careers crossed over from country music to the early, seminal days of American rock 'n' roll. While the contemporary yet timeless feel of Kevin's own music is strongly influenced by the 'California Country-Rock' of artists like Gram Parsons, The Eagles, and Roger McGuinn, his deeply resonant songwriting recalls the Americana-flavored storytelling of Bruce Springsteen and Jackson Browne.

Having spent the last four years of a decade-long career touring relentlessly and building an almost cult-like following in England and Europe, Kevin Montgomery offers up thirteen engaging stories of life, love, laughter and loss on his third album, 2:30am.

Kevin's father, Bob Montgomery was an early songwriting and collaborative partner of Buddy Holly. By the time Kevin was born, his dad was producing records by Bobby Goldsboro and writing songs like the often-covered ‘Misty Blue' and ‘Back in Baby's Arms', made famous by Patsy Cline.

Meanwhile, Kevin's mother, Carol had a thriving career as a Nashville session vocalist, singing back up on pop classics like Elvis Presley's ‘Suspicious Minds' and Robert Knight's ‘Everlasting Love'. "Many evenings, my dad would come home with records he was in the midst of producing," Kevin remembers. "He'd put our big stereo on full blast and we'd listen to what he'd done that day. From a very young age, I was picking records apart, trying to identify the different instruments. My parents never pushed me to become a musician, it just happened naturally".

A&M released Kevin's debut, Fear Nothing, in 1994 to critical acclaim, and after a year and a half of touring with Peter Himmelman, Sheryl Crow and David Crosby, he ended up back in Nashville. Kevin stayed on the radar by working on the 1996 Buddy Holly tribute album, Not Fade Away: Remembering Buddy Holly. He recorded the song "Wishing" (written by his dad) as a duet with Mary Chapin Carpenter (Bob Montgomery also co-produced the track).

Kevin was increasing his profile as a songwriter, Martina McBride recorded, ‘I Won't Close My Eyes', (from Fear Nothing) for her 1997 double-platinum selling album, Evolution. Later, Juice Newton covered Kevin's song ‘Red Blooded American Boy' (changing the gender reference to 'girl') for her 1999 release, American Girl. Kevin also sang backing vocals on Lee Ann Womack's ‘I Know Why The River Runs' for her platinum selling album, I Hope You Dance.

When Kevin recorded 2:30am, co-produced with Robert Reynolds of The Mavericks, he knew the sound he was going for. “Over the past few years," he explains, "we've developed The Road Trippers with hardcore touring. We know the reaction certain songs get from the audience. I wanted that live energy to come across in the recording, but I also wanted to capture the subtleties of the music."

To get the balance right, top shelf studio musicians such as pianist Matt Rollings, bassist Glenn Worf and drummer Chad Cromwell joined Perkins and Britt to approach some of the more subtle songs, while Reynolds and Deakin joined their fellow Road Trippers to put their vibe on half a dozen songs. Adding to the staggering collection of guest talent on 2:30am, Trisha Yearwood contributes impeccable backing vocals to the album's rousing lead track, ‘Tennessee Girl', and Lee Ann Womack lends her voice to ‘I Can't Drive You From My Mind', a track co-produced by Kevin's father.

To support 2:30am's release, Kevin plans to continue his extensive touring schedule, both acoustically and with The Road Trippers. "We'll be going all over the US and all over the world, really," he says. Currently, the video for Another Long Story is in regular rotation at VH1 Country and the Great American Country video channel as well.

"This all happened because I have some wonderful friends that believe in the music, and i never stopped persevering," says Kevin. "Even when I was delivering papers and pushing carts in the parking lot of Sam's, my one goal was to release my own records, tour and make a living doing music. Now, that's what I'm doing. I try to apply the life lessons i've learned to what I do now in music. I went from being the new kid in town to Sam's, and that was a good lesson."

When an artist's music is honest, authentic and heart-felt, you don't really need anyone else to tell you it's the real thing, because you can feel it. Kevin Montgomery's 2:30am is that kind of an album

Per Ellingsen with Kevin Montgomery - All The Angel

"Nothing" by Kevin Montgomery
▶ View All Videos