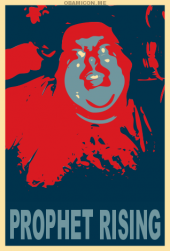 Mike Farmer hails from Fordsville, Kentucky (pop. 581) and went to school at Ohio County High School in Beaver Dam, Kentucky. He graduated from Western Kentucky University in Bowling Green, Kentucky. He moved to Los Angeles to pursue a music career in 2001. He returned to Fordsville in 2003, having earned no platinum or gold records, no MTV Music Video awards, or record contracts.

During his LA sojourn, Mike Farmer had a short-lived role on a short-lived show, "Beat The Geeks". He was hated by fans in his ten-episode stint as Substitute Music Geek and was canned by show producers (who later went on to subject viewers with The Surreal Life and other VH-1 programs starring Flavor Flav).

For a brief period, he worked as an engineer's assistant for teenage r&b group B2K's album "Pandemonium". Duties as an engineer involved playing video games with the group, building a portable basketball hoop, and making Baskin-Robbins and In-N-Out Burger runs. Almost no actual experience behind a soundboard was had.

During this time, he continued to pester his neighbor, Colin Smith aka Smitty, into recording some rap tracks. Initially, Colin demurred but during a visit from friend Ian Gaffney aka DJ Cappel, Colin took Mike into the studio. The first song the three of them worked on was "Somehooow" which ended up on the Kentucky Prophet EP "Brain Rap"

Nearly five years later, Colin is currently between residences while Ian is subletting his Brooklyn apartment to someone who doesn't mind not having Central Air. Mike is currently typing this at home in Fordsville. Occasionally, the three of them congregate to make new jams and CHANGE THE FACE OF POPULAR MUSIC AS WE KNOW IT.

They're talking about getting together in early fall 2008 to record a follow-up to Beyond The Fringe. Possible album titles include "Fat Angels", "Dr. Bathroom Rides Again" and "URRRPPP!"

BUY THE NEW ALBUM BY CLICKING ABOVE