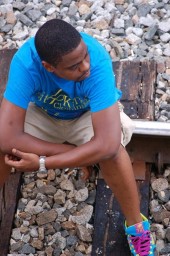 “He really showed me how shady this music industry is, he really opened my eyes to a lot through his experience as a signed recording artists. This places me in a unique position not to make the same mistakes.”

Known for his personal lyrics and unique fashion sense, William has been quietly creating a buzz in northeast Florida with his new group, The Freshmen. This collective of unique individuals from varied backgrounds has managed position themselves uniquely in North Florida’s burgeoning Hip Hop scene. While each artist professes to be a solo artist, the group routinely writes, records, and performs songs together. William, the group’s most vocal leader explains, “We all are solo artists, with solo projects in mind, however we all represent Get Fresh so, yeah I guess we’re sort of a group in that sense….”

William the eve of his 26th birthday, William sat quietly in the “Freshidence”-as they affectionately call their home. He sat thinking, “When first started rapping, I never wanted to be that guy, you know the guy in the club, the local legend, still trying to get a deal at 35…I guess, I just always felt like ‘this time’ would be the time to do it…” This time, which William is referring to, is the ripe age between 25-30. The age of maturity, an age of reflection, and direction. William plans to take his music to the next level upon moving to the ever changing, fast paced city, Los Angeles. After building relationships with several artists there, namely Inverse who featured Just Will on their debut project “So Far…the collection” Will plans to return to the dangerous city to fulfill and realize his dream of become a successful recording artist.

MattyBRaps - Can’t Get You Off My Mind

will smith just the two of us (subtitulada en español)

Bruce Hornsby & The Range - The Way It Is (Official Video)

Will Young - I Just Want a Lover

Will Smith - Just the two of us (Lyrics)