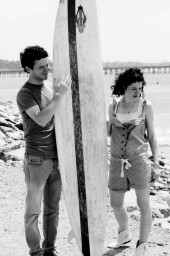 Originally from Baltimore, MD J&M have been writing and recording together since 2003 when they released their 1st record, Concentrate. In 2005 they were signed with RCA/Victor Records and Chrysalis Publishing and spent the next two years touring the country and promoting their record "Subjects", recorded in Cello Studios (Hollywood, CA) with father and son team Lenny and Joey Waronker producing.

In 2007 they moved to Nashville and recorded Kingdom of Noise with producer Neilson Hubbard. Since releasing that record independently and touring, they have also signed with Media Creature Publishing.

Besides that they're interested in things but are not real doctors.

Judd and Maggie - Sleep Interrupted (Because of You)

Judd and Maggie at The Rutledge