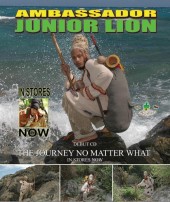 Get this video and more at MySpace.com

Elliot McCarrell Laurence, a.k.a. Ambassador Junior Lion, was born on February 19th, 1980 in French St-Martin. He grew up in the district of Round the Pond, where he attended French Quarter Primary School, College de St. Martin, and then unto Lycee Polyvalent College where he studied Auto Mechanics. Junior Lion comes from a Musical Family, his father, Alfred Laurence, was a boxer, fisherman and a mason, he died on July 1997. His mother, Veronica Francis, is a songwriter and singer. Junior Lion was inspired by his older brother,

Pompette, a.k.a. Lion (thus his name Junior Lion), a chanter and dancer who listened to Bob Marley, Peter Tosh, Big Youth and many more. He gave way to Junior Lions early inspiration and love for Reggae Music. His sisters Lydia and Shantell Laurence are international Zouk singers.

At age, 5-7 Junior Lion was the lead singer for his church choir. He was able to sing different notes, a skill he mastered by the teaching of his mother. At age thirteen, he started writing his own songs.

In 1997, he joined with artist and friend Shabba Love and formed the Massive Crew. They performed live in high schools and colleges. Junior Lion was then known as B.E.T. Best Entertainer of Times; the name was given to him by his audience because of his ability to DJ, dance, rap, and sing in different languages. In 1998, he chose the Rastafari way of life and formed his own group called Jah Nation with brethrens such as Jahlando, Miagui, Jungle and Ras Rudy a.k.a. DJ Clue, while still working with the Massive crew. They performed in clubs, restaurants, and other venues, until members began traveling, leaving Jahlando and Junior Lion on The Journey.

Junior Lion's first big show was in the summer of 1999 when he opened for a French International Reggae artist, Sael, at the Galisbay Sport Auditorium. On July 7 2001, Junior Lion opened for the Junior Kelly concert at the Carnival Village in Philipsburg, where he got a resounding applause.

In the year 2002, he opened for the Capleton show at the Raoul Illidge Sports Auditorium in Cay Hill and performed with Capleton in Tampa, Florida in 2003. He later performed at the Beenie Man concert in 2003, at the Carnival Village and it was there where he got the title, The Ambassador. It was also at this event that he deejayed his two hit singles Inna We County and Wha Fe know on the Engine and Thank You Mama rhythms. On June 19th he performed for the Universal Negro Improvement Association and African Communities League, Marcus Garvey Memorial Division, 454 for a Fathers Day Social event at Livity Vegetarian Restaurant, Old Hope Road, Kingston 6, Jamaica, West Indies. On Sunday July 31st of 2005, he performed in the Reggae Jam Fest 2k5 in Jamaica.

In February 2003, Junior Lion went to Jamaica, where he stayed two years to record songs for his album The JourneyNo matter what, and he formed his own record label, Starliner Records. While there, he worked with producers such as John Meatley, Cash Flow records, JR productions, Black Scorpio, Colly Budd, JB Senior from Big Yard and many more. On October 29 2005, Junior Lion performed in Bermuda, at Clear Water Beach, St David, with artists such as Leo-Tan, I Wayne and Tony Rebel. His performance was astounding! Junior Lion was invited to appear in I Waynes video Cant Satisfy Her. On February 10, 2006, he performed at the Beres Hammond Concert, which was held at the St.Maarten Port Facility where he rocked the crowd.

On February 24, 2006 an album press release party was held at Axum Café, Philipsburg, St.Maarten, for the launching of his album The Journey No Matter What (Starliner Records 2006). On February 25th 2006 he performed at the Louis Vanterpool Field, Marigot St. Maarten, with Richie Spice and Kiprich.

One of the highlights of the year, was when Junior lion won two awards at the St-Martin Music Awards: "Reggae Artist of the Year" and " Recording Artist of the Year. A well-deserved recognition for Junior Lion and his hard-working Starliner Records/House of Ancient Family.

Since then Junior Lion has been touring in the Caribbean, USA, and Europe.

He has been working on two new albums that are scheduled to be released in 2007, "Black Roses" and "Rasta City".