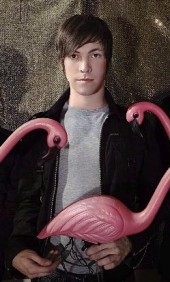 What They Say:
".impassioned and moderately creepy." -Michael Roberts, WESTWORD

"Even better than the visuals was the music. Hypnotic, raw yet energetic rock n' roll. This band was solid, they were cool and they looked like rock stars."
-Jennifer Layton, INDIEMUSIC.COM

".Singing of betrayal and bitterness with an overflowing beauty, the wave of vocals and guitar weaving and cascading off the stage or speakers."
-Kim Owens, KAFFEINE BUZZ

"It's understandable why Joshua Novak doesn't want to be categorized as a singer-songwriter: he's a lot more than that restrictive label. The, ahem, singer-songwriter-guitar-keyboard player manages to write songs that are both tender and jarring. His sweet voice silkily accompanies heart-wrenching songs that have the ability to grab guts and keep on tugging. " -UCD ADVOCATE

A perennial favorite in Denver's singer/songwriter circles, Joshua Novak's melancholy voice and profound lyrics lend him a maturity that juxtaposes his young appearance. But it's not just the vocals, the accompanying melodies add to the emotional substance of his songs.
-METROMIX

"Joshua Novak could probably be called a "singer-songwriter" in a technical sense, but so were Jeff Buckley and Nick Drake. While it would be premature to compare Novak to either, like those dead heroes, his songs don't, for a moment, recall the awkward musical gropings heard in coffee shops or at open mike nights. A lot of people want to be their heroes, but Joshua Novak is just trying to be himself. His rhythm section was so spot on, it allowed him to launch into flights of emotional and musical exuberance. At times, with his gritty intensity, he recalled early PJ Harvey, at others he evoked Jackson Browne, if only Browne wasn't so lame and a lot more spooky. Novak's voice sounded fantastic. More impressive, though, is the fact that he seems keenly aware that no matter how great your voice happens to be, if the music going along with it isn't at least as commanding and interesting, the songs fall flat."
-Tom Murphy, WESTWORD

THE BIO:
"Joshua 'Super-Nova' Novak was clubbed over the head in 1962 by a mob composed of such notables as David Bowie, Crazy Mick from the Stones, and a group of people who would later be known for founding the non-hippie variety of free love in deepest Manhattan. Joshua was packed in ice for 40 years and became the world's first successful time traveler. Seems Joshua was too much of a threat in both talent and ability to make all the pretty boys and girls swoon. We're lucky to have Joshua's voice fill the air in these times and once you've seen him perform, you'll agree that not only is superstardom in his future, but Bowie and Jagger really didn't have a choice. He still has the same effect on all the pretty boys and girls and maybe even more than the old days.His brand of cool has to come in small doses. As a species, humans have evolved out of a tolerance for that much cool all at once." -Professor Felix
A self taught musician and alleged bastard royalty, Joshua Novak burst onto the Denver music scene in early 2000--young, carefree and seemingly touched with effortless pop magic. Since then, he has become a celebrated fixture of the scene. Recently he placed in the top 20 out of 560 bands in the DENVER POST's BEST OF THE UNDERGROUND. He is a five time WESTWORD SHOWCASE nominee, one of fifteen winners in the MODMUSIC RECORDS INDIE BAND SEARCH in N.Y. and has played RED ROCKS as part of the epic MONOLITH FESTIVAL which included acts like TV ON THE RADIO, VAMPIRE WEEKEND, THE KILLS, JUSTICE and others.
He has shared the stage with the likes of ELF POWER, BRENDAN BENSON, EVAN DANDO, WOVENHAND, AZURE RAY, THE MOUNTAIN GOATS, THE FRUIT BATS (etc), and played Denver's best venues including The Gothic, The Bluebird, Hi-Dive, Larimer Lounge, The Oriental Theater, The Walnut Room and even at the famous club, The Bitter End, in New York City.
He has received sensational reviews in BILLBOARD MAGAZINE, WESTWORD, THE DENVER POST and THE ROCKY MOUNTAIN NEWS as well as notable on-line sources and music mags such as KAFFEINE BUZZ, DENVER SYNTAX & INDIE-MUSIC.COM.
Recently, Joshua's highly anticipated full-length album, DEAD LETTERS, was released to critical aclaim. Both the DENVER POST and WESTWORD included it in their best albums of the year lists for 2010.

Joshua NovakPromote Your Page Too