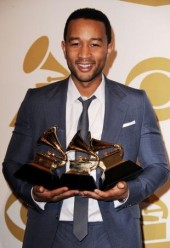 John launched his career as a session player and vocalist, contributing to best-selling recordings by Lauryn Hill, Alicia Keys, Jay-Z and Kanye West before recording his own unbroken chain of Top 10 albums -- Get Lifted (2004), Once Again (2006), and Evolver (2008) --each of them reaching #1 on the Billboard R&B/Hip Hop charts.

Most recently, John and the band The Roots released Wake Up! (2010), a compilation of music from the 60's and 70's all with an underlying theme of awareness, engagement and social consciousness which won two Grammy Awards for Best R&B Album and Best Traditional R&B Vocal Performance. The album is highlighted with tracks like "Little Ghetto Boy" by Donny Hathaway and Baby Huey and the Babysitters' "Hard Times." Wake Up! also includes John’s original composition "Shine," which won a Grammy award for Best R&B Song and is featured in Oscar award winner Davis Guggenheim’s domestic education reform documentary Waiting for ‘Superman.’

Throughout his career, John has worked to make a difference in the lives of others. In 2007, John Legend launched the Show Me Campaign (ShowMeCampaign.org), an initiative that uses education to break the cycle of poverty.
John was awarded the 2010 BET Humanitarian of the Year award, the CARE Humanitarian Award for Global Change in June 2009 and received the 2009 Bishop John T. Walker Distinguished Humanitarian Service Award by Africare.

John sits on the Boards of The Education Equality Project, Teach for America and the Harlem Village Academies and Co-Chairs of the Harlem Village Academies’ National Leadership Board with Rupert Murdoch. He is the national spokesperson for Management Leadership for Tomorrow, a non-profit organization that assists the next generation of minority business leaders. In 2007, John was named spokesman for GQ Magazine's "Gentlemen's Fund", an initiative to raise support and awareness for five cornerstones essential to men: opportunity, health, education, environment, and justice. He is also a member of the Board of Directors of PopTech, a unique innovation network with a mission to accelerate the positive impact of world changing people, projects and ideas.

John stars in The People Speak, a film about social change in the U.S. and is a frequent guest on political talk shows including Real Time with Bill Maher, Anderson Cooper 360º and MSNBC’s Morning Joe. He supported President Barack Obama’s presidential campaign, including appearances at benefit rallies and concerts; the premiere of a new song, "If You're Out There," at the 2008 Democratic National Convention; and a live Inauguration Day performance.

In response to devastation surrounding Hurricane Katrina, John partnered with Tide laundry detergent to address the needs of families in hard-hit areas. John works with Product (RED), which benefits the Global Fund for AIDS, TB and Malaria.
In his Time 100 tribute to John, Quincy Jones explained "He is a genius…and we've seen only the tip of the iceberg. For all that he has already achieved in his career, it is going to be fun watching where he goes from here."