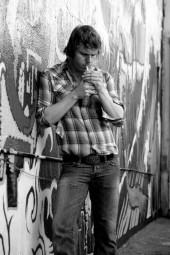 Joe Thalman is the kind of musician that you want to grab a beer with and get inside his singer-songwriter head. And if you smoke too, Joe just might tell you some of his musical and lyrical secrets. But maybe not - because Joe Thalman’s music can’t be explained with mere words. It has to be heard, where it speaks for itself.

He gives you rock. He gives you blues. He gives you a voice that seduces you to listen to his Americana roots-based style, which sounds like he invented the musical genre on his own. His songs are built with the kind of structure and story-telling found in early American rock ‘n roll.

Joe’s skills as a musician are showcased with prowess on acoustic and electric guitar and harmonica, all of which he plays on his new CD Blue Vagrant. His first solo acoustic record and second album, "Blue Vagrant" was produced by Joseph Holiday of the band Lady Sinatra and formally of the Symptoms fame. The record was co-produced by Joe with Michael Anderson.

On Blue Vagrant he writes about late nights, heart ache and heart break – all kinds of soulful, sad songs that he had to get out of his system and his psyche. For his next CD, Joe is planning a bigger project with a full-tilt, kick-ass rock ‘n roll band that he’s used to fronting. In the meantime, he is artistically content knowing he recorded his acoustic collection from a very personal perspective.

His debut CD, These Days, released in 2005 was unadulterated adults-only rock musically and thematically. Self and co produced by Michael Anderson, These Days was co-engineered at Would Work Sound by Evan Frankfurt, utility player for the Wallflowers, who worked with Warren Zevon and the Bangles and Luke Adams (Pete Yorn and the Sheers.)

Joe Thalman is a Jersey Boy, turned Philly Guy, who became a Nashville Artist and an LA Local Favorite. Growing up in Williamstown, his early and heavy influences were rockers like U2 and Springsteen when he started playing guitar at age 12.

But a decade later his tastes matured and he moved to Nashville where he was inspired by legions of legendary country crooners. This “Music City USA” scene developed and fostered the serious vocalist in Joe and his songwriting was a natural evolution.

After a couple of years he knew it was the time musically to have his own band and came back to Philadelphia to make it happen. But before too long he left for the west coast and found it a great match for his raw rock ‘n roll needs. Living in a room in the late Orson Wells mansion in the Hollywood hills was another LA experience that fueled Joe’s creativity from a sex ‘n drugs and rock ‘n roll perspective. He used his memories of days and nights best forgotten to write Blue Vagrant. The Blue Vagrant release party was held at the famed Hotel Café in Hollywood, CA.

Joe is a must musician to see live. He’s here reconnecting with the Philly and east coast music scene for a few months and is having a record release party for Blue Vagrant at the Tin Angel on Oct. 4. Now’s your chance to see a local boy who’s making it good.

SILVERNOVA at Harvard and Stone "Hold On"

A Moment of Weakness by Fallback

A Moment of Weakness - original song performed and written by Fallback