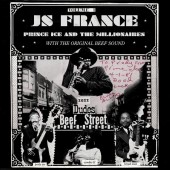 The third album, Afrikan Majik, comes out in May 2007 on Antenna Farm Records. Sometime shortly before or after that album we're putting out a split 12" with Acid Mothers Temple, on Nokahoma Records. There's also a never-ending stream of cd-r eps (and a couple of seven-inches) on Nokahoma. Before all of this there was the Fantastic Area album on Orange Twin and the self-titled debut on Pitch-A-Tent. We hope to eventually release a cd on every label in America.