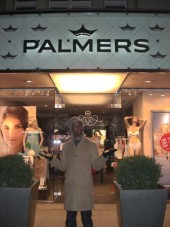 Jason’s quintet has been serving as the house band at Boston’s historical Wally’s Jazz Café for the past nine years. He has also presented his band at the Tanglewood Jazz Fest, the Jazz Standard and the Jazz Gallery in NYC, the Studio in Hartford Ct, as well as other venues throughout New England. In 2007, Jason Palmer was commissioned by the Festival of New Trumpet Music in NYC to premier a new work for his quintet.

In addition to maintaining a heavy performing schedule, Jason Palmer continues to maintain a busy schedule as an educator/actor/board member at JazzBoston. At a time when many music educators in the Boston area are commuting from New York City, Jason commuted from Boston to New York City to serve on the faculty at the New School of Jazz and Contemporary Music in the fall of 2008. Jason has taught trumpet and directed ensembles in the Preparatory Division and the School for Continuing Education at the New England Conservatory of Music in Boston for the past ten years and is teaching at the Mission Hill School for the past five years. He is also a faculty member at the Aquinas College Jazz Camp (Grand Rapids, MI, 2004-present) and has given masterclasses in Portugal, the UK, and Mexico. Jason was the leading actor in director Damien Chazelle’s Guy and Madeline on a Park Bench. The movie received great reviews after premiering at the Tribeca Film Festival in 2009. Since then the film is screening at film festivals in Greece, Bratislava, Martha’s Vineyard (MA), Houston (TX), Denver (CO), Seattle (WA), Los Angeles (CA), Calgary (Canada), Minneapolis (MN), Mill Valley (CA).