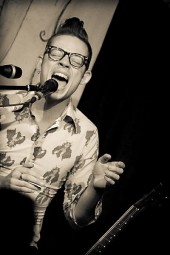 Location:
oslo, NO
Type:
Artist / Band / Musician
Genre:
Swing
Label:
universal
Type:
Major
BioConnections
Wildbirds & Peacedrums
SHINING
Real Ones
Einar Stray
Arve Henriksen
Lama
In the country
Live Maria
David Wallumrød
Audun Erlien
Trygve Seim
Wolf Whistle
Green Granadas
bendikbeat
dandylion.
Madeus
Helu.
I had this idea of writing an album about my home town, Oslo. It came out (in Norway anyway, shit difficult to get hold of anywhere else) in September 2008, under the title 'Ceramik City Chronicles'. I still like it. Right good that is, I've played the songs about a bazillion times, rehearsing and gigging quite a tad. In January 2010 a double live album called '1: Man 2: Band' is released, again with some proNorwegian bias (seriously, I try to avoid this protectionism, but music bisnis is like a cage) Some of the gigging you can hear and see here even, marvellous high tech possibilities indeed. In early spring, there'll be a new album out, called >'Solidarity breaks'. You might want to check it out, I promise it'll be available in a larger geographical area this time around.Squeeze it, but don't hit it. Wear it on your wrist, but don't lick it.

Jarle Bernhoft feat. Jill Scott - No us, no them

Bernhoft - So Many Faces | SK* Session