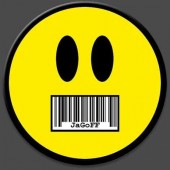 JaGoFF - "Seven Second Delay" from the CD, "There's One Born Every Minute". Available on iTunes & CDBaby.

JaGoFF - "Bust A Nut" from the CD, "There's One Born Every Minute". Available on iTunes & CDBaby.

JaGoFF REVIEWS:
----------------------------------------
**** (4 STARS). "Dark and funky, this album is a little bit Prince, Roy Davis Jr and a little bit Disco D. Dancable and free, each song gets the ass shakin' a little bit more. The project is so sexy that if you haven't gotten any by the closing song, "Baby FaTT", you need a new face."
URB Magazine, 7/2005
"Following successful nationwide treks on the Warped Tour in 2003 and 2004, Chicago-born JaGoFF decided it was finally time to collect their music onto a debut LP. Theres One Born Every Minute showcases this DJ duos aptitude for mixing tight techno beats and old-school funk bass lines with a unique vocal collision of high falsettos and Barry White-like basses. And as might be evident from their name, they love to pack each song with morsels of sexual innuendo (see Bust A Nut, Bump That Ass, and Interspecies Embryo Transfer)."
Illinois Entertainer 12/05 Carter Moss
"Impossibly deep funk bass lines, crazy-eyed crew sing-alongs and a gritty bent put the Chi-town squad in post-Parliament territory. But this isn't just the orthodox funk of George Clinton's famed outfit. Between its rich harmonies and lyrical edge, is everything from gospel to rap."
"Editor's Pick" - CNET/Download.com - 12/2006

"Finally a successer to George Clinton .
the missing link between funk and hip-hop."
Bokson Music Magazine (France) 04/05
"Delightfully grotesque display of gluttiny with a bump of sardonic apathy to the commodification of the female gender, and the extreme displays of casual sexuality ubiquitous among the secular populations so burdened by such marketing tactics. My head could not stop bobbing untill my headphones fell off." - Eric Donovan Lester 12/06"Top 5 Picks"
DJ Charles Feelgood, URB Magazine
"The
Next 100" Issue - 04/2004
""Insidiously sleazy."
Imageyenation 07/05
"Instantly Classic - JaGoFF MAKES ME MOIST!"
" The Record Industry.com - 05/2004

"erotically hip, ghetto spankin, techno, slammin, funkbreakin soundz. Try these new beats on and you won't want to take them off."
Brilliantly Mad Magazine: 02/2005
"The word "independent" is a word that is re-shaping itelf in a land of
independence that has allowed big business and government to become synonymous. Over and over again, with friends in many places in the world, I have re-defined the word "independent" in the most current references and
terminology available.
One reference which always stands for what I believe in, which stands for Nu-est Skool artist credibility, which always backs me up in these discussions of what it TRUELY means to be independent, is a music group called JaGoFF.
JaGoFF does it the JaGoFF way. Lyrics that address major issues while
simultaneously addressing the crowd that neads to hear it. Their DIY efforts are focussed carefully generating new opportunities which JaGoFF proceeds to take by the ballllzz. And to take the cake the music is so goddamned good that you always want more.
Locale - 11/05
".will make you change your panties"
Southend, Wayne University - 10/05

JaGoFF - NEVER MET A GIRL LIKE YOU [OFFICIAL VIDEO]