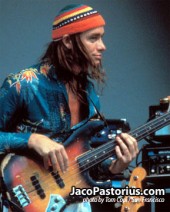 For those who may be new to the Jaco experience, John Francis Pastorius III was a rare and wonderful spirit, brimming with life and vitality, who traveled through this world in what to him was the noblest profession as a musician.

A true American original, Jocko came of age in Florida during the 1970s, where he was raised on a blend of rock-and-roll, R&B, jazz, classical, island, and Latin music. He possessed unbelievable levels of natural energy and talent, both creative and technical; skills he shaped into a language that let his remarkable and beautiful inner voice take flight through the instrument. His ability to combine incredible precision of note and meter with a profound inner spirit allowed him to reach inside and touch the listeners most intimate and vulnerable emotions. He was a visionary who looked to the past, an R&B player who looked to jazz, a jazzman who looked to rock-n-roll, an innovator who drew from everywhere creating things that were completely new. Through a combination of hard work, ballsy ambition, and an expansive yet singular inner vision, he brought the electric bass guitar into musical adulthood. In the process, he gave birth to some of the most beautiful and compelling music that's ever been played. Period y'all.

But of course Jaco was so much more. What makes his music so infectious is also what made his life so incredible he lived it from inside each new moment.

He was all about exploring and extracting the maximum out of each moment of life. The smile was one of Jacos trademarks. It was a natural outgrowth of what he did. Jacos music was about joy, spirit, and freedom; his life was about adventure. Revered as a genius by some and a god by others, people all around the world were taken in by the passion and the naked honesty of his life and music.

Slang into America the Beautiful

Note: This is a short excerpt from Pat Metheny's liner notes to the 2000 reissue of Jaco's debut album, "Jaco Pastorius", a piece we feel captures what Jaco and his music is all about.

jaco pastorius may well have been the last jazz musician of the 20th century to have made a major impact on the musical world at large. everywhere you go,sometimes it seems like a dozen times a day, in the most unlikely places you hear jaco's sound; from the latest tv commercial to bass players of all stripes copping his licks on recordings of all styles, from news broadcasts to famous rock and roll bands, from hip hop samples to personal tribute records, you hear the echoes of that unmistakable sound everywhere. (it may even be more imitated at this point than the previously most pervasive jazz sound to escape into the broader culture beyond the local borders of jazz, the moody harmon mute stylings of miles davis). for all the caterwauling that has gone on about new musicians that have shown up in recent years being toted as the "next miles", or the "duke ellington of their generation", or whatever, jaco outranks all of them and all of that by being the one and the only of his kind, without predecessor; the only post 1970 jazz musician known on a first name basis with all music fans of all varieties everywhere in the world. from the depths of africa where he is revered in almost god-like status to the halls of most every music university on the planet. to this day, and maybe more than ever, he remains the one and the only JACO.

The Best of Jaco Pastorius

Will Lee speaks about Jaco