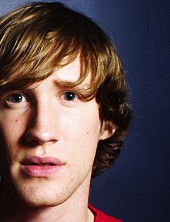 This Is A Landslide

What the press is saying:

".these songs with all their different vocalists and styles lead us into completely different musical territory not imagined before. Be glad for this album." - Indie Rock Reviews

".a tightly produced album. the album dabbles in a number of styles, but remains rooted in electronic-driven rock." - NPR.org

"This Is a Landslide proves [Dalley] has a significant amount of ability to aptly craft electronic soundscapes, dabbling in sounds both insistent and ambient." - PopMatters

"Landslide" flirts with a dark, romantic pop edgyness. and is propelled by the muscular, occassionaly frantic undercurrent of electronic beats and programming." - New Band Noise

"An actual capital-A Album. 4 out of 5 stars" - Alternative Press

"Landslide sounds wholly unlike anything else on disc today." - metro.pop

To know Denver Dalley, is to love him.

The onetime guitarist from Conor Oberst’s Desaparecidos, and frontman of the hiatal Statistics, has been spending the better part of the last decade touring the globe and leaving a trail of close friendships in his wake. Incredibly kind and lacking the aloof pretension that most musicians flaunt, Dalley has established an army of devoted friends and followers everywhere he goes. INTRAMURAL is proof of this.

Over four years in the making, This Is A Landslide, is the work of Dalley and co-producer Sam Shacklock. The two became friends in 1998, while Dalley was finishing high school in Tennessee. A few years later they began to collaborate on an electronic music project. According to Dalley, things started quickly, “We tracked my songs almost exclusively in different home bedroom studio set-ups, and I even recorded one of the songs (“Rocket”) in a college dorm room. Wanting to further collaborate and explore, I asked a few friends to sing on some tracks.”

Sounds simple enough, and from there, it just snowballed. Well-known singers came and went over the years, and as the songs evolved and improved under the close care of Dalley and Shacklock, so did the finished project. While it took a long time to actually take its final form, This Is A Landslide adds a much welcomed vocal variety and personal warmth to the all-too-cold genre of electronic music. From the downright epic choruses courtesy of The Pink Spiders’ Matt Fricton on “My My, Tennessee” to the smoky cool of Twilight Singer’s Greg Dulli soulful moan on the title track, the guest vocalists of This Is A Landslide make themselves at home on each and every track. The genre confines are quickly blurred with the swirling electronic foundation of INTRAMURAL, as each vocalist customizes their individual song to fit their singing style.

All that is missing from This Is A Landslide is a “Volume 1” tacked onto the end of the album title. While it took four years to complete this record, Dalley is already hard at work on it’s sequel, with a completely different sound and lineup of guest vocalists. Much like Dalley himself, whose restless traveling and touring was the impetus of this project, INTRAMURAL is a music collaboration that refuses to establish roots and remain still.

The release date is set!

This Is A Landslide will be released October 23rd!

The final track listing and line-up for the debut record is:

1. My My, Tennessee (with Matt Friction of Pink Spiders)

2. Queens of Comparison (with Judah Nagler of The Velvet Teen)

3. From the Ground (with John Roderick of the Long Winters)

4. This is a Landslide (with Greg Dulli of the Twilight Singers)

6. Folded (with Gabe Archer of the Pale Pacific)

7. Rocket (with TJ Penzone of Men, Women and Children)

8. Spy (with Tricia Kanne of Minipop)

10. Nights Are Long (with Josh Dawson of Slender Means)

11. Needle Point (with Teresa Eggers of the Evening Episode)

First Row: Other Bands/Projects that Denver is in.

Second Row: Other Bands that you should check out.

All the other Rows: Artists or people that appear on "This Is A Landslide".