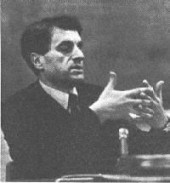 This is a fan site. Please do not send messages- I will not read them. And no, I am not Xenakis. he died in 2001, so he's not around to appreciate your emails thanking him for his great music. Enjoy!

He was born in Braila, Romania to Clearchos Xenakis and Fotini Pavlou, and studied architecture and engineering in Athens, Greece. Xenakis participated in the Greek Resistance during World War II and in the first phase of the Greek Civil War as a member of the students' company Lord Byron of ELAS (Ethnikos Laikos Apeleftherotikos Stratos, Greek People's Liberation Army). He received a severe face wound from a British shell which resulted in the loss of eyesight in one eye. In 1947 he fled under a false passport to Paris. In the meantime, in Greece he was sentence, in absentia, to death. In Paris he worked with Le Corbusier. While his assistant, Xenakis designed the Pavillon Philips in Brussels, home of the première of Edgard Varèse's Poème Électronique at the 1958 Brussels International Fair. Later, he composed one of his most famous pieces, Metastasis based on the architecture of the Pavilion itself. It remains one of his masterpieces. Xenakis performed at many world expositions and fairs, and played annually in the Shiraz Art Festival in Iran.

Xenakis's primary teachers of composition were Arthur Honegger, Darius Milhaud, and Olivier Messiaen. At the time he began composing in earnest, Xenakis had not had much formal study of music and almost nothing of theory, and so he studied harmony and counterpoint with whoever was willing to accept him as a student despite his vast gaps in knowledge and reluctance to defer to established authority. His own early compositions, however, rarely followed the rules he was being taught. His first meeting with Honegger exemplifies his attitude toward formal instruction: asked to play one of his compositions on the piano, Xenakis was stopped promptly as Honegger pointed out parallel fifths and octaves. Xenakis had written them intentionally and refused to "correct" the piece. Honegger attempted to humiliate Xenakis, who simply left to study with Milhaud. However, he believed Milhaud's teaching also to impose restrictions he found arbitrary and inessential.

Meanwhile, he continued to work full-time as an architect in Le Corbusier's employ, composing only as a hobby. Xenakis was a creative architect, exploring the possibilities of new materials and shapes in construction, and was frequently entrusted with important projects that called on his technical and artistic skills. Le Corbusier, who came from a musical family (and pretended to hate music) also mentored Xenakis as a composer; he regarded Xenakis and Varèse as two of France's most innovative and promising.

Later, Xenakis approached Olivier Messiaen for compositional advice, expecting to have to start his musical studies again from the beginning, but was told "No, you are almost thirty, you have the good fortune of being Greek, of being an architect and having studied special mathematics. Take advantage of these things. Do them in your music." Messiaen, whose own compositional style did not follow established precedents, did not try to impose the limitations of baroque counterpoint of serialism as previous teachers had, but rather let Xenakis find his own musical ideas and guided them along. Xenakis attended Messiaen's Paris Conservatoire classes regularly, and his confidence grew along with his compositional skill; he would shortly thereafter combine the mathematical ideas he had been developing in Corbusier's studio with the musical tools he had been honing with Messiaen to produce his first major work.

He is particularly remembered for his pioneering electronic and computer music, and for the use of stochastic mathematical techniques in his compositions, including probability (Maxwell-Boltzmann kinetic theory of gases in Pithoprakta, aleatory distribution of points on a plane in Diamorphoses, minimal constraints in Achorripsis, Gaussian distribution in ST/10 and Atrèes, Markov chains in Analogiques), game theory (in Duel and Stratégie), group theory (Nomos Alpha), and Boolean algebra (in Herma and Eonta), Brownian motion (in N'Shima). In keeping with his use of probabilistic theories, many of Xenakis's pieces are, in his own words, "a form of composition which is not the object in itself, but an idea in itself, that is to say, the beginnings of a family of compositions." Unlike most of his contemporaries (i.e. Milton Babbitt, Schoenberg), Xenakis did not want the listener to be aware of the forms and theories used to produce his compositions.

In 1966, Xenakis founded the Centre for Automatic and Mathematical Music in Paris and subsequently set up a similar centre at Indiana University.

In 1962 he published Musique Formelles — later revised, expanded and translated into Formalized Music: Thought and Mathematics in Composition in 1971 — a collection of essays on his musical ideas and composition techniques.