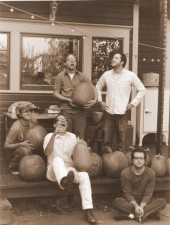 Houseguest is a Neo-Mannerist “adventure rock” band from Akron, Ohio comprised of five cuties who are BFFs and real bad-boys! They like to hang out at the mall, drink Dr. Pepper™, eat at Wendy’s®, and shop at Hollister®! They also like to take their Hollister® shirts off when they get excited from drinking Dr. Pepper™, which makes the GIRLS totally flip like a hot hamburger patty at Wendy’s®! (Please contact Audio Eagle Records about using Houseguest to endorse your products in a future “band bio!”)

Houseguest was created in 2001 by a Cray™ supercomputer programmed by Audio Eagle Records tyrant Patrick Carney. His intention was to create a famous band to help finance his fledgling musical outfit, the Black Keys. Many years and several records later, Houseguest is still not famous, and the very famous Black Keys are now financing them! Whatta hoot! Oh well! Keep that pity money flowing, and unfurl those coattails so good old Houseguest can grab on tight! They’re laughing all the way to the bank!

When You've Run Out of Ideas:

LET"S SEE WHAT ALL THE BITCHES SAYING ABOUT HOUSEGUEST:

"A Magic Eye for the Ears"

"(Houseguest's) songs progress in sporadic fashion with twists, turns, and vocal breakdowns that appear in bizarre places. Somehow it all comes together and works really well for the band; you could think of it as a Magic Eye for the ears."

"Remember when Guided by Voices were really good? Well, forget that for a sec because Houseguest are really good right now. Like GbV, they’re chronically catchy, and they have a similarly frayed set of production values, but they don’t leave you with that lingering sense that you’re a sucker and will listen to anything.

“Houseguest is Akron, Ohio’s band du jour. Deservedly so. But what adds weight to the hope that they will get over that local hump is their journey so far. In their five years together they have already lost a close friend, busted up the band and reformed, and grabbed a Northeast Ohio super-group label of sorts for their roster’s pedigree.“Now, they have overcome the novelty of their live show reputation (where the band and half the audience often seem to end up on stage and in various stages of undress) and released their first full-length release on the Audio Eagle label, founded by old friend and Black Key Patrick Carney. And while the abandon of their stage presence is something to behold, what they are capable of committing in the studio is staggeringly beautiful, skewed pop. 8 out of 10.”

“Houseguest is simply the best pop band in the country.”

“Remember the recent film You, Me and Dupree? You probably didn't see it, but you recall its premise—Owen Wilson's zany bachelor moves in with newlyweds Matt Dillon and Kate Hudson, and antics ensue. He taught us all something about ourselves, but that Dupree sure overstayed his welcome!

“Akron's Houseguest, on the other hand, is the kind of visitor you can receive into your home without reservations. High Strangeness will quickly become a permanent resident, filling your quarters with music that's relentlessly catchy and smart, tight but jittery, muscle toned but not bulging.

“In addition to wowing you with perfect pop rock, you'll find it making its bed (and yours), taking out the trash and preparing delicious feasts.

“In short, this album offers all the life-changing potential of a visit from Dupree without the full-frontal nudity. Grade: A”

“I've caught a lot of things in the past year: a couple colds, an elbow in the ribcage, a run of bad luck with two flat tires in two weeks, my hands in the cookie jar, grief from my mums for not returning all of her phone calls in a timely manner, but none of these things are as catchy as this new CD, High Strangeness, by Houseguest.

“So, how did a modest band of misfits from Akron, OH, manage to make the catchiest guitar pop record my ears have heard in years? Well, it starts with the singing of Ted Mallison, whose crooning make him sound somewhere between Bob Mould and Morrissey. Add in the rhythm section of bassist Gabe Schray and drummer Steve Clements, who adeptly steer the band through endless twists and turns. Finally it's topped off by the double guitar acrobatics of Dave Rich and David Whited, and you have Houseguest's recipe for perfectly crafted pop. 8 out of 10.”

“In its first release on a major record label, Houseguest proves that it is here to stay. Released on Audio Eagle Records, High Strangeness is a refreshing album full of head boppers and catchy tunes. Houseguest, five Akronites who have been staple members of many local outfits for several years, manages to come together and craft something classic.

“…a lush and well-crafted album.”

“There’s a fine line between sounding intelligent and sounding grating, particularly when lyrics are involved, but Houseguest soft-peddle the jokes and, what’s perhaps more important, the irony. The most obvious precedent is Kurt Wagner’s work in Lambchop – all bemusement and understated intelligence.”

“In an age where most bands are practically dripping with self-importance, Houseguest’s lighthearted attitude is a welcome relief. It also helps that the band’s music is so Goddamn immediate, exciting, and catchy that it wouldn’t even matter if they didn’t have a sense of humor.”

“Houseguest’s pop shuffles and sashays with an off-kilter grace, like a defiant drunk finding his way home. Guitars shamble and rumble with repressed power, rising in hooky swells that call to mind Guided by Voices, Beat Happening, and the Feelies.”

“Worthy of a Second Glance”

“Houseguest may have already been touted on this here site (I'm not completely sure) but regardless, their jittery, bookworm, brand of pop is worthy of a second glance. Who knew the Rubber City was capable of spawning an infectious hybrid of the Feelies, XTC, David Bowie, Orange Juice and the Wedding Present? Anglophiles unite, for this is simply the finest British band that's from no where near Britain.”

“Contrivance at it's Worst”

“Even if this were totally original, it would still suck. The playing is almost too confident.; it's pretty clear that these guys know how to play their instruments; they play them so balls-out that it eventually becomes infuriating.”

Houseguests - What So Never the Dance, Pts. 1-2
▶ View All Videos