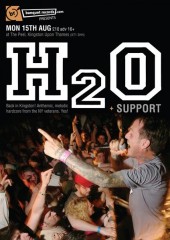 Location:
Los Angeles, New York, US
Type:
Artist / Band / Musician
Genre:
Punk / Hardcore / Rock
Site(s):
Site
Label:
Bridge 9
Type:
Indie
BioConnections
New Found Glory
Story of the Year
Set Your Goals
Sick of It All
Madball
Murphy's Law
Danny Diablo
Kill Your Idols
Freddy Madball
Bridge Nine Records
HAZEN STREET
Define The Meaning
ENEMY INK
H2O is a band that had beginnings like any other band. No one could have guessed that a few guys and a former roadie from New York would start a band as a one-song side project and it would turn into a world-touring powerhouse. They took humble roots and worked their way to add their chapter to the long history of New York Hardcore and they would define the term “melodic hardcore” that would become so common years later. From 1996 to 2003 was unavoidable- four albums on Blackout!, Epitaph, and MCA records with over 300,000 copies sold, constant world touring with the likes of the Mighty Mighty Bosstones, Rancid, AFI, Pennywise, & the Used, Sick Of It All, the Misfits, 7 Seconds, and Madball, as well as runs on the Warped Tour-they established themselves as a household name and inspired countless others in their wake. In the pre-internet world of hardcore and punk, H2O was the band that blended the heavily-tattooed, unbridled rage of New York bands like the Cro-Mags and Agnostic Front, with the punk melodies of bands like the Descendents and Token Entry. It’s hard to argue that bands a decade later would take the melodic hardcore groundwork laid by H2O to wider audiences.

It's now 2008 and H20 is still here, but Nothing To Prove is not a comeback – that’s way too simple. Nothing to Prove is a statement of everything the band is and a taste of what the band will be in the future - and it’s nothing short of incredible. Frontman Toby Morse said it best, “This time feels urgent. I feel everything on this album has been building up over the last seven years. That’s why this album is called Nothing To Prove - because it’s all out on the table.” This is H2O’s most personal, most angry, most positive, hardest, yet catchiest album to date, and it comes into a scene not unlike the scene that H2O originally entered. Hardcore and punk as concepts have been diluted, confused and hyphenated to the point where it’s a marketing term. Nothing To Prove is a ten-song breath of fresh air and honesty that is poised to revive an otherwise stagnant “scene”.

The re-emergence of H2O hits with the first notes of the opening track, “1995.” Only a few solitary chords before the crashing of a fast, raw and melodic song, complete with classic sing-alongs and a perfect breakdown. The title track is next and while it’s only a minute and a half blast, “Nothing To Prove” sums up H2O’s manifesto for this release: the band is back and while their history speaks for itself, they’re not resting on any laurels. Featuring Agnostic Front’s Roger Miret and the one and only Danny Diablo, the band shows they haven’t forgotten where they came from. As the album progresses, H2O reminds the listener that their penchant for infectious anthems and choruses has not dissipated one bit.

Lyrically, we see Toby Morse as up front and honest as he’s ever been. Anthems about being straight edge in his 30’s (“Still Here”), to being a responsible adult with tattoos (“Heart On My Sleeve”), and the personal sacrifices and vulnerabilities we all feel (“Unconditional”) are all present on Nothing to Prove. With “Sunday,” listeners get a stunning display of Morse’s personal story - the passing of his father when he and his brother, H2O guitarist, Todd Morse, were young children, and the subsequent birth of his own child on the same day of the week. Toby bares it all in one of the most personal songs H20 has written. Ending with the anthem, and first single, “What Happened?” we are presented with a testament to the power of H2O. The song is an anthem about questioning the ethics and motives of bands and music in general today, but the subject is addressed in a positive way. They take an infectious anthem and up the ante with appearances by Lou Koller of Sick Of It All and Matt Skiba from Alkaline Trio both showing what they do best. It’s a formidable closer and it’s the last statement in an album that is the most forthright in their career thus far; their hearts are on their sleeves. Bassist Adam Blake commented, “This is the first time I’ve ever seen Toby NEEDING to write lyrics. He just kept writing and writing and writing and it came so easy to him once he got started.”

What makes Nothing To Prove such a monumental album is that it is a collaboration of many long-time H2O fans, only now, instead of stage-diving and singing along, they’re behind the boards of the recording studio, designing the artwork and releasing the albums. Produced by longtime fan and friend of the band, Chad Gilbert (New Found Glory), a new perspective was brought in. Toby said, “Chad really knew how to help us take good songs and make them sound great.” Gilbert stated, “I am a fan of H2O and this is an album that fans of H2O want to hear. They needed to make this record and I’m really proud to be a part of it.” Bridge Nine Records’ owner Chris Wrenn and label manager Karl Hensel both have their own histories with H2O running over a decade as well. “This entire project has been amazing,” Wrenn stated. “Everyone involved is passionate about the album and it’s been a great experience watching this album get created start to finish and to see the band’s reaction and excitement about the finished product. They’ve never had this kind of control or say in every last aspect of the process. It’s an honor that H2O is a part of our legacy and it’s an honor that Bridge Nine is apart of H2O’s legacy.”

H2O, much like you’d expect, is hitting every corner of the globe spreading the word that H2O is undeniably back.

H2O - People find out Cleo is a mermaid