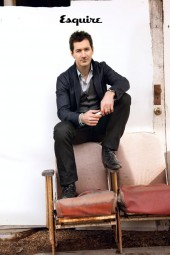 Location:
Nashville, Tennessee, US
Type:
Artist / Band / Musician
Genre:
Rock / Folk / Punk
Site(s):
Site
Label:
Nettwerk
Type:
Indie
BioConnections
KT Tunstall
Mat Kearney
Marc Broussard
Teitur
Tyler James
Over The Rhine
Sons Of William
sandrine
Ten out of Tenn
Wildblast
Guilty Now Innocent
Although Springfield, OH native Griffin House didn't begin playing guitar and writing songs until he was 18, the power of his music struck an emotional connection with audiences immediately. The athletic gifted House shocked his family by turning down a golf scholarship to focus on a new path making music. "Sports were really a big part of me and how I grew up," he says, "So deciding not to take that scholarship was a turning point for me in choosing a new path for myself, a new life making music." There were some issues to deal with first, however – he couldn't play the guitar he'd bought from and friend, nor had he ever written a song.

"I took a couple of guitar lessons and got so frustrated that one day I kicked the strings off my guitar," he recalls with a laugh. "It sat there for about a year, but I took it to school (at Miami of Ohio) with me and made up my mind I was gonna learn how to play. One night I picked up my guitar and wandered around campus till I could barely keep my eyes open, trying to play this one chord over and over. Finally, around 4 a.m., my hand got used to it and I formed my first G chord."

Not long afterward, he wrote his first song for the high school sweetheart with whom he'd parted ways after graduation. When she came for a visit, House played it for her, and it brought her to tears. "Then I was hooked," he says, "I thought, 'Oh, man, if I can make people cry, I'm gonna keep doing this. I'm gonna make as many people cry as I can!'" After laughing at the memory, he puts the experience in perspective: "What I was drawn to was the power of the song, how it could affect people emotionally."

The epiphany caused the neophyte's creative juices to bubble over, and he got really good really fast. After graduating, he joined some of his buddies who'd moved to Nashville, and started doing solo gigs at the bottoms of bills in local clubs. Within months, he was headlining, surprising himself at his rapid development. "I was working in a gift shop downtown for $6.50 an hour," he remembers, "and four months later I was flying to L.A. and New York for meetings with record labels."

House signed with Nettwerk and banged out his first CD with his band in five days, before moving from Nashville to Cincinnati. He spent most of the subsequent three years on the road, while also finding time to record several "direct-to-fan" releases, a pair of EPs (House of David Vol. 1 & 2) and the 2006 digital release Homecoming.

He didn't fully understand at first, but writing and recording these songs about his "own issues" was the best sort of help he could possibly offer others, friends and strangers alike. His intelligent and heart-felt lyrics and melodies in such songs as "The Guy Who Says Goodbye to You Is Out of His Mind" and "Better Than Love" have garnered commercial and critical acclaim alike. From being featured on the CBS Sunday Morning Show, to touring with the likes of John Mellencamp and the Cranberries, House continues to gain national recognition and currently is headlining his own tour across the U.S.

Griffin House Sings, Go Through It

Griffin House - Go Through It