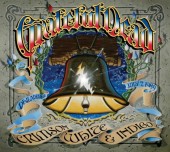 Location:
US
Type:
Artist / Band / Musician
Genre:
Jam Band
Site(s):
Site
Label:
GDP
Type:
Major
Bio
The Grateful Dead were enjoying a late-career renaissance in 1989 when the band steamed into Philadelphia on one of the hottest days of the summer to play the last concert ever at John F. Kennedy Stadium. The July 7 show in the City of Brotherly Love highlights the band’s exuberant resurgence, a peak that rivals any that came before it. CRIMSON, WHITE & INDIGO: PHILADELPHIA, JULY 7, 1989 - DVD/3-CD set is available NOW from Grateful Dead/Rhino at all retail outlets, including Dead.net. A digital version featuring all of the audio content will also be available.

The Philadelphia concert offers a snapshot of the Dead’s 1989 tour, where the band played to some of its biggest audiences ever, a result of the group’s only Top 40 hit, “Touch Of Grey” from 1987’s In The Dark. During this tour, the band was recording the follow-up to that album, Built To Last, which is an important reason why the jamming heard here is particularly fluid and concise. In fact, the band played a pair of songs from the upcoming album, the aching ballad “Standing On The Moon” and the poignant “Blow Away,” a song cowritten by keyboardist Brent Mydland, who sadly died a year later.
The band helped raze the aging stadium, thundering through “Hell In A Bucket,” “Little Red Rooster,” and Bob Dylan’s “Stuck Inside Of Mobile With The Memphis Blues Again.” Many sitting at the north end of the open-air stadium recall the concrete bleachers trembling during Mickey Hart and Bill Kreutzmann’s drum duet in the second set. The show closed with another Dylan cover, “Knockin’ On Heaven’s Door,” the last song ever performed at JFK.