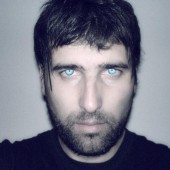 His beginnings as a DJ go up to the end of the 80's, in Buenos Aires, spreading several alternative electronic music styles across the years.

At the end of 2001, Argentina turned to be a country where the political and social conflicts made everything to get a bit gloomy.

Among other things that at a human level were more important, the local under scene tumbled down!

It was and introspective period for him at a personal level, and also at an artistic level. As a way of escaping and reaction to his surroundings, he started to produce his own material, just to share it with a reduce group of people. Sr. Replicante was born. This time lapse, which meant an ideal creative period, it was also significant to many artists, DJ's, musicians and designers of Argentinean electronic culture.

Today, in 2010, just 9 years later from that emotional time and emotional scar that initiated him as a producer and thanks to the interaction and influence of ideological partners from his country, he feels also involved in a process of continuous search, trial and experimentation, and also differentiation. Since Sr. Replicante is emerging, and at the same time belongs to a redesigning stage.