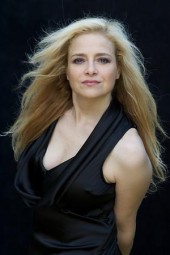 Location:
Brentwood, US
Type:
Artist / Band / Musician
Genre:
Rock / Alternative / Pop
BioConnections
Björk
King Crimson
Violeta Parra
Ryuuichi Sakamoto
anylou
Kacee
YEYE Organic Pop
Derek Frank
Silvestre
BANDAGE! - The Rock Opera
IJEOMA
Maria Entraigues
FRANCIS BENITEZ
Pi Gamma
Well;my bio starts in Chile born out of a surreal mix of Italian(my grandma only spoke napolitan!!)-Swiss, and German- English. and ends up here in California.
I am a singer, I play guitar and write songs,mainly rock songs because that's what I know best,and mainly in English even though I do a lot of spanish stuff.
I tried the band thing for a long time but it didn't work so I have been doing backround vocals,touring and writing for others.(I should mention some of the people I 've worked for so it looks like a real bio!) I toured for a loooong time with the rock band LA LEY, I have performed live with rock indie bands in clubs(Silvestre is one check it out!!), and for different artists on T V shows ,award ceremonies shows etclike Collin Hay ,Sheila E,Santana, Wayne Newton, Dancing with the stars.
I do studio work as well and I have to mention the one artist that made my mother incredibly happy:Andrea Bocelli I have also worked for Enrique Iglesias,Placido Domingo,Melissa Etherige,Luis Miguel, Rocco Prestia ,J.Mathis Perry Farrell , Cristian Castro, Meatloaf but nothing compares to the live and studio recording of "BANDAGE "The Rock Opera!!! it's an amazing rock musical with unbelievably talented singers and performers and musicians and songs that are no less than brilliant and it's fun it'a a trip,hope theydo it again and it gets the attention it deserves.
I GOT A NEW BAND WE WILL B PLAYING SOON ,HOPE TO C UR FACES THERE!!!!!!!!!!
Well, there's my bio,I have included some songs from OLIVA ,a great band I don't have anymore. unfortunately,and they rock. I wish you all people taking the time to read this ,the best,peace love and understanding Thanks,Gi
PS;If you send me an invitation I wanna check your pageI don't like violence and stupidity(my idea of stupidity may be different than yours) I like people that THINK!! Don't take mediocrity for granted, want to protect the planet,recycle, take action and vote!!!I love music and art in all forms , I believe it will save us! Religion should bring us together and make us more tolerant but it seems to me we do the opposite ,war is definitely not an answer and I don't uderstand how come we haven't learned anything from the past.
Global warming is as real as massive black holes and we should make the effort to learn about it.EDUCATION IS THE ANSWER. Love the neighbor,not only the one that looks like you, everything around us has the right to be there.Your enemy can be your best teacher and finally .have a sense of humor,we are going to die anyway.I do the best I can to keep this in mind all the time and if I fail,I try again. -