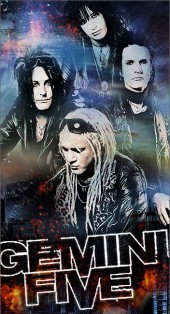 - This is a huge step to finally have it your AND our way, says Hot Rod. No compromises what so ever! Street-gutter-metal-sleaze. -Our strenght has always been our explosive live performances!. By this album there is no gap between of how we deliver either way. The energy on this album is something you can touch and a sensation you can't deny. We're the defenders of the raw and sleazy hardrock which always been cool!!! Gemini Five entered the Stappenwolf Studio (Stockholm, SWEDEN) in October 2007 and recorded their third album; SEX DRUGS ANARCHY. This time the band themselves acted as producers.

- If you want it right you gotta do it yourself, says Tin Star. The 12 tracks was recorded as a three-piece as lead guitarist Dee Dee joined the band in March 2008 (after the recordings was done and only stayed for 6 months). We know what we want and how the sound is outta be so why bother fighting with a producer. Swedish rockers Gemini Five joined the Rock & Roll circus 6 years ago with flash and balls and the talent to back it up.

Since then the band's been performing numerous shows in England, Germany, Italy, Belgium, Finland, Holland and landing record deals in the USA, Japan, Brazil, and of course Europe. Their album's and singles has been climbing top charts. The two first releases "Babylon Rockets" (2003) and "Black:Anthem" (2005) have both received worldwide intense reviews. In January the band received an award for "SEX DRUGS ANARCHY" at the Swedish Metal Awards 2009 for 'best album' which made their third album the most estimated and recognized to date.

Gemini Five - You Spin Me 'Round (Like a Record)

Gemini Five - Chemicals Between Us