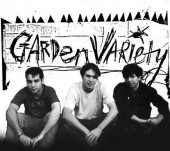 "When this came out in the late '90's, I remember the punk scene had a hard time categorizing it-and it was a time when sub-genre mattered a great deal. for those who looked past the fact that they(gv) transcended labels and got it, got it. And what a brilliant album it was. KNOCKING THE SKILL LEVEL was their second outing, following an album that had sealed them as a burgeoning East Coast pop-punk outfit, New Jersey to be specific. Their second record-and their last-was noisy and discodant, but had this subtle melody that made it accessable. Somehow, this garnered plenty of very unfair comparisons. It was an album that didn't draw upon it's first hearing, as the songs meandered through plenty of dynamics, textured tempo changes, and other general traits that were too challenging for a casual listen. And then another. The songs are far from catchy, but definitely infectuous. Sections of this album (that breakdown that happens a quarter way into "Chatroom Walkout" Holy shit!) will get stuck in your head, but I'll never be able to hum them, and theirs a certain beauty in that elusiveness." - Vincent Chung/PP

"To give you all an idea of how much I loved Garden Variety as a naive teenager, when my second band (of four, proper) played a show in the summer of 1996, I wore a Garden Variety t-shirt and played a guitar emblazoned with a huge, homemade Garden Variety sticker. And we tried our damnedest (unsurprisingly) to sound like them as well. The very friendly folks from Dahlia Seed, who co-headlined the show and had earlier released a split 7" with GV, apparently took to referring to us as 'Garden Variety, Jr.' I took it -- get this -- as a compliment. What the hell was wrong with me? Other than the fact that I just loved Garden Variety that much, I don't really know. What can I say? I was a silly kid. As I grew up a bit, I realized that the Garden Variety, Jr. tag was really more a term of derision (albeit friendly derision. I think). I was never really as embarrassed as I think I might have been though, had we been referred to as 'Green Day, Jr.' or 'Sick of it All, Jr.' Even if we weren't that great at it, I'm still pretty proud that we threw in our lot with bands that went for a bit more than the cheap pop punk or shout-along hardcore that dominated the scene at the time. And when I survey the 'emo' scene that grew up in the wake of bands like Garden Variety in the later nineties, I can't help but be impressed with the fact that their two full-length albums stand out as gems of the genre, such as it is. " - deadvinyl blogspot comment by Scott

"I guess we formed when I got a tape from roman and rizzo who also had an ad out in a crappy long island zine asking for a drummer who liked punk and it listed bands like skunk and i think the replacements or soul asylum, maybe squirrelbait was in there too, it was a good ad and one you didn't see on long island at that time, i was way psyched to meet these guys. Anyway, we rehearsed a few times and it was perfect. We were a band in no time, because the music was there and it all connected. The influences, the general attitude, even the sneakers we wore, it was a band in the truest sense. From there, I guess we we met a lot of good folks like Vinny and Charles and not so good folks. I'm sometimes sad that I am not a part of that family anymore, but i enjoyed my time there. I am proud of those records." --Joe Gorelick/Retisonic Radio interview 2003

.amazing guitars, brilliant drumming and scream/singing that could make you cry with happiness.-Amazon.com

Knocking the Skill Level is a volatile and immediately powerful blend of harder rock styles: musically, there are vague punk and hard-rock touches in the angular indie-guitar work, while the vocals and overall construction lean toward powerful and explosive emo structures. This blend is remarkably effective, and tends to sound bigger than most three-pieces would dare; through a series of well-constructed tracks, the band builds up frantic swells of sound, drifts down from them, and then returns to anthemic, punch-in-the-face riffing without ever seeming like they're trying too hard to be as powerful as they are. This very solid release will appeal to fans of driving rock, anywhere between Cap'n Jazz and Stanford Prison Experiment. ~ Nitsuh Abebe, All Music Guide

The video for "Harbored" filmed in and around Valley Stream, LI (roman's basement across from where we all lived to be clear) and live scenes from shows at CBGB'S, UNDER ACME and other clubs. Thanks to Matt Bass for doing such a great job with so little.

"New Guitar Parts" Live at Wetlands NYC 1996-One of only a handful of times played live.

"Shelf Life" live on US tour - I believe this is Kansas City, Missouri as we stayed with Boys Life that night. I remember i got sick and slept in our van.

"Parker" live on US tour

"Harbored" cut off at the middle but a good version. Into Another was up next.