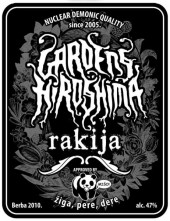 Location:
Zagreb, CT
Type:
Artist / Band / Musician
Genre:
Hardcore / Metal
Site(s):
Site
Label:
DIY
BioConnections
FAT PREZIDENT
KILLING OPTION
Analena
Dolibasija
ground zero
Igut
This Day Will Burn
Plan B
ALL THE ARMS WE NEED
Things Fall Apart
TRUE
usud
Senata Fox
Breaking the Fourth Wall
TOST
Cojones
SIZIF
Daisy
Hidden Layer
Frekvencija
DEADRISE
Gardens of Hiroshima was formed in the year of 2005. in Zagreb, Croatia. Under the influence of melodic death metal and new school hardcore bands Robert (of Igut and TheySuck!), Mihael, Jakov (Of Hidden Layer) and Dinko (formerly of Things Fall Apart) started to make some music. From the band's beginning, there were some line-up changes: Jakov (Hidden Layer) was replaced by Andrija (of Breaking the Fourth Wall and formerly Dig A Hole) 10 days before the first show. We had our first gig in KSET, Zagreb while supporting Dead By Mistake, and a few days later we played with The Plague Mass in The Vila Kiseljak Squat. Since then the band has been playing all over Croatia, at the same time preparing songs for their first recording, an EP entitled "Choose Your Side", recorded and mixed by our good friends Brankec (of Usud, all of the recording took place in their garage) and Iko (of Senata Fox, Amok and ex-Nikad).

In the meantime we've figured out that another guitar would help us improve our live sound (not that it needed much improvement :) ) and we invited our good friend (Mislav of Hidden Layer) to complete the band. Now that the Gardens Of Hiroshima lineup is complete, the band is ready to combine each member's influences and come up with more elaborate music, while still improving on our original sound. New songs are being worked upon every day, and we are looking forward to recording the collection of the new songs we have, and at the same time coming to your town and presenting you the live sound of what is Gardens Of Hiroshima.

Gardens Of Hiroshima - Her Eyes Are Graves (8 bit)

Gardens Of Hiroshima - Her Eyes Are Graves live @ KSET 07

Gardens of Hiroshima-Deserters
▶ View All Videos