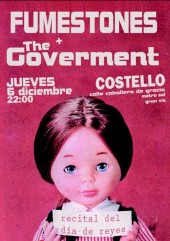 The band came into being late one night, 9 years ago like a three-piece garage punk combo. But was five years ago when they became a really band introducing bass and organ players. The Fumestones recorded their debut “Sunday Morning” in october 2002, two of these song become in their first released “ You neve know 7” “ for the australian label, Wild Eagle Records.

The 7” It's a generous share of intense rock 'n' roll music where compromise and commercial considerations have been thrown out of the window and it had been very well received in both fanzines and major magazines all over Australia and Europe.

This made they being included on the “Ipunkrock festival” CD compilation with bands like Cynics, Maggots, Feedbacks, Del-gators.

At the end of 2003 The Fumestones released their first album “Fiver than Ever”, a LP / CD, on the Spanish label H-Records. On this release The fumestones continue to lash out their brand of garage punk/rock'n'roll filled with equal shares of hooks and mad fuzz attack rave-ups.

Their present their new release at the Wild Weekend Festival, playing during 2004 all around Spain. The play also in several festivals like the Actión Weekend, the Freakland Festival, The Primitive Festival finishing the year with a little tour in England playing with Billy Childish and with the Exciters.

and “Minibar” for KURIOSA RECORS in Holland.

Fumestones - coming back to me
▶ View All Videos