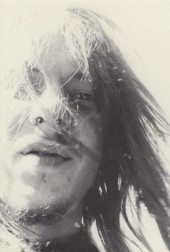 Location:
US
Type:
Artist / Band / Musician
Genre:
Experimental / Ambient / Electroacoustic
Site(s):
Site
Label:
Elektra, Atlantic, Orchidé, Arista, Mack Aborn
BioConnections
The White Stripes
Sonic Youth
Neil Young
Black Rebel Motorcycle Club
George Jones
Patti Smith
Bill Hicks
The Bran Flakes
Artie Shaw
Rhys Chatham
Albert Ayler
ERNEST TUBB
Walking the Cow
The Magic Radio Ensemble
Hope Binds Reason
The Claude Zac Ensemble*
Frederick Dewey Smith
September 14, 1949 - November 4, 1994
"I came back from the most holy waves, born again, even as new trees renewed with new foliage, pure and ready to mount to the stars" - Dante Alighieri
The most spiritual men, as the strongest, find their happiness where others would find their destruction: in the labyrinth, in hardness against themselves and others,in experiments. Their joy is self-conquest. Difficult tasks are a privilege to them; to play with burdens that crush others, a recreation. They are the most venerable kind of man: that does not preclude their being the most cheerful and the kindliest. - Friedrich Nietzsche

I seriously doubt I'll ever encounter anyone as cool as Fred Smith.
Fred possessed a tremendous mystique, he was a true artist. The real deal - not a pretender, an introspective, soft-spoken guy with a dry sense of humor, a powerful and mysterious spirit with a unique dignity and an uncanny knack for communicating, both personally and in his music.
When push came to shove Fred could take care of himself but, as long as you didn't get in his face, he was generally easy-going.
Musically, Fred was just possessed, he existed in a space most people can't even comprehend. Kind of that Hendrix or Coltrane thing, that supernatural place Patti Smith seeks and frequently finds, where the spirit aroused becomes larger than the musician himself. Heavy stuff, very few players have the balls to fly that close to the flame, even fewer can handle it.
The kids who saw Sonic's Rendezvous were very lucky to witness that, in the moment. Creating and performing music was a serious thing to him, Fred could communicate more with a guitar solo than most can with words. He wasn't interested in slumming around musically and represented himself well.
Considering Fred had spent half his life playing some of the most innovative high-energy music in the world, it's hard for me to understand anyone faulting him for taking what was perceived to be an extended, though much deserved, vacation from the rock wars. But it wasn't a vacation, it wasn't retirement, it was evolution.
Fred got married, traveled, fathered and raised two children. He trained to fly airplanes and got his pilot's license. He bought a home on Lake St. Clair and did a lot of work there; there was an in-ground swimming pool beside the house that Fred physically busted up and filled in by hand. Throughout this period he continued writing songs, creating arguably the best work of his life; "Dream Of Life" was our first serious glimpse into that work.
The problem with Dream Of Life wasn't what it was but what it wasn't, it may have failed to match other's preconceived notions and unrealistic expectations; that was yet another area Fred specialized in. Similarly, his greatest shortcoming was that he chose to dream and then attempted to make his dreams reality.
But, as Fred once famously said, "I've heard worse problems, you look in good shape, though."
Fact is, it would seem Fred Smith lived his life in the way that he apparently wanted. Whether or not he fulfilled all his artistic aspirations, much less those others attempted to impose upon him, isn't clear. But he did manage to live a full life in a relatively short period of time, touching an incredible amount of people in a real special way.
"It Takes Time", a song Fred and Patti recorded for the Wim Wenders End of the World soundtrack, indicates he remained intent on exploring new musical dimensions till the end of his life. Had he been able to truly access a real support system, Fred's published body of work would have resembled someone like Neil Young, who's been consistently recording since the '60s. Ever-changing, growing and moving forward.
Inspired people move on to create new adventures and "Sonic" Smith exemplified that. Fred's whole life was about moving on, he never played MC5 songs during the Sonic's Rendezvous period; upon that band's 1980 demise, Fred continued to evolve and broaden his musical and personal horizons.
Enjoy the music, respect the past, but live in the future. That's certainly what Fred did, he epitomized his philosophy, walked it the way he talked it. That's why Fred "Sonic" Smith was the cat. - Freddie Brooks, Sonic's Rendezvous chargé d’affaires

Fred Sonic Smith - Over and Over (Acoustic instrumental 1970)