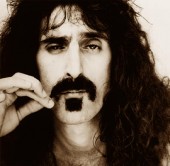 Be very afraid of being Danish. Or not.

In 1966 the first Double Album in Rock 'N' Roll which was also the first Concept Album in Rock 'N' Roll and the first album in Rock 'N' Roll in which the music revealed disciplines and constructs far more familiar in the world of classical music, made it's way into the hearts, minds and consciousness of just enough of those people under the age of 30 to cause them to Freak Out! beyond their wildest expectations, even in Kansas! It did happen here, there and everywhere. And we are pleased to present the Sessions, the Man and the Music that made it all possible. (And impossible!)

MOFO, like the release that inspired it, is a double release. Frank Zappa's Official Album 77 is the Limited Edition which contains 4 Discs of audio magnificence and a 60 page booklet of joyous fetishment. Available exclusively through Barkfo-Swill. Official Album 78 is the lovely & talented 2 Disc MOFO with the wild abandon of a 30 page booklet included - appearing in stores on 7 November. Freak Out! now - before it is illegal.

Frank Zappa One of the Last Performances (Prague 1991)