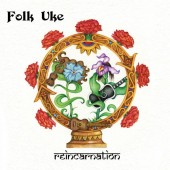 We were inspired by many of the agreeable greats of the Folk, Country, and Americana genres. Our favorite chords are C, F, and G. So, if you’d like to play along, well, it’s that easy.

Of our infamous families, the two of us had been the musical holdouts until we gave into the force and began writing and playing music together. Armed with a ukulele and a guitar, we penned songs such as ‘Shit Makes the Flowers Grow’, ‘Knock Me Up’, and ‘Motherfucker Got Fucked Up’ and we thought, “What a crime it would be to keep these national treasures to ourselves. How can we keep silent when we are the voice of a nation?”

You may not hear us on the radio, since our songs have been described as “inappropriate”, “off-color”, “not ready for mainstream” and “NSFW”(Not Safe For Work).

Our debut EP, ‘Folk Uke’, is self-titled, as are we. It was produced by Abe Guthrie and ourselves.

“Family values” would be the common chord in this unprecedented collection of songs, since we let our Dads take the solos and chime in when they were compelled to do so. It was the least we could do for our executive producers. It made them feel good and that made us feel good; so we took the chance that it would make thousands of people feel good and we printed thousands of copies.

Folk Uke Motherfucker Got Fucked Up

Folk Uke Tonight You Belong To Me

Folk Uke I'm gay For You

Folk Uke I Gave A BJ To A DJ