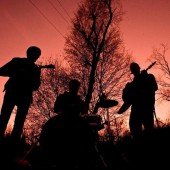 Here's the lowdown on Kansas City's 8th Best Irish Band! Cameron Russell (guitar/vocals) and Shane Borth (violin) have been playing music together since high school.which for them has been a long, long time. Michael Cochran (drums) met Shane in 1999 while both attended the Conservatory of Music at UMKC. There was a 2 hour jam session/audition and Michael was in the band. At this time the Theis twins (you know who you are!) filled out the lead guitar and bass as Circadian Rhythm was born. In a local pub named Harling's, Shane and Cam began to learn Irish tunes through Eddie Delahunt. Then Circadian Rhythm became Self-Same, whilst Michael dropped out for while. Long story short.they played together again on New Years Eve of 2006 as the Irish Blugrassical Band Flannigan's Right Hook and have been rockin out ever since!!!

Cameron graduated w/a BA English and minor in Music Performance from the University Of Kansas.

Shane is also a substitute performer for the Kansas City Symphony, and has completed a BA in Music Performance at UMKC.

Michael is also a trained classical/jazz percussionist from UMKC.

Flannigan's Right Hook- With or Without You ( U2 Cover)