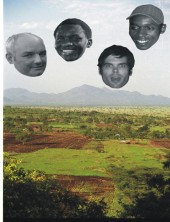 Extra Golden was formed rather casually in May of 2004 when Ian Eagleson, Alex Minoff and Otieno Jagwasi began fiddling with each other’s compositions in an apartment in the Buru Buru neighborhood of Nairobi. For rhythmic inspiration, the trio used isolated drum tracks by Onyango Wuod Omari that Eagleson had recorded earlier that year. After several song ideas were hashed out, Omari came by the apartment and, tapping pencils on a table, familiarized himself with them. The next afternoon, the four musicians met at the Annex Club and Restaurant in Kariobangi South Estate. Positioning themselves on a concrete slab between the tables and the restrooms, they set up a laptop and mixing board, a broken-down drumset, a couple of amplifiers and several microphones. Three hours later they packed up and left, the majority of Ok-Oyot System completed.

A year after this initial recording session, Otieno Jagwasi succumbed to his long struggle with liver disease. Besides causing great sadness, Otieno’s passing spurred Eagleson and Minoff to bring these recordings to the public. Chicago’s Thrill Jockey Records agreed to release the album and, in May 2006 – exactly two years after the group’s formation – Extra Golden was introduced to the world.

Ok-Oyot System’s unique blend of Kenyan Benga music with American Rock and other, assorted African guitar stylings met with widespread critical praise. The immediate demand for Extra Golden concerts was deafening. After months of hard work and determination, that demand was finally met, as the group arrived at the 2006 Chicago World Music Festival. Many weeks of engagements followed, after which Extra Golden holed up in a house in Pennsylvania’s Pocono Mountains to tackle the task of recording a follow-up to their beloved debut. Five days later the group emerged with twenty new tracks, eight of which constitute Hera Ma Nono.

At first, Extra Golden seems an unlikely entity. However, this project that was birthed on a whim, a crazy “what if…” scenario between friends, has steadily grown into a fully-realized, musical dynamo. For evidence of this evolution, one need look no further than Thank You Very Quickly, the group's latest Thrill Jockey offering. Its six tracks are Extra Golden's most accomplished yet. It remains to be seen where Extra Golden will go next, but with more touring and recording ahead, the future sounds good.

FOR THE LATEST IN NEWS AND MERCHANDISE (INCLUDING "ORIGINAL GOLDEN") CHECK OUT www.extragolden.com