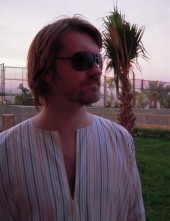 Erik Johannessen is educated at Jazzdepartment NTNU in Trondheim and the university in Oslo as a jazztromboneplayer. He plays currently in Jaga Jazzist,

Trondheim Jazz Orchestra. The music is mostly on the free side of jazz and popmusic. He sometimes writes music for small and larger ensembles.

Erik has toured Norway a number of times, and the world with Jaga Jazzist, Lord Kelvin, Ensemble Denada and Loud Jazz Band. In Trondheim Jazz Orchestra he has worked with composers and soloists such as Joshua Redman, Eirik Hegdal, Terje Rypdal, Jon Balke and Maria Kannegård.

Some Pics of me and my bands and places here and everywhere: