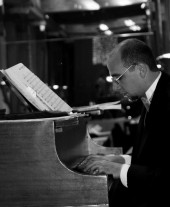 Location:
Winston-Salem, North Carolina, US
Type:
Artist / Band / Musician
Genre:
Experimental / Classical / Black Metal
Site(s):
Site
Label:
Centaur Records
Type:
Indie
BioConnections
Lunar Saxophone Quartet
James Barry
Randall Woolf
Forecast Music
Renegade Ensemble
Eric Schwartz has studied composition at the Cleveland Institute of Music, New York University, and both the Interlochen and Aspen Summer Music Festivals. Past teachers have included Margaret Brouwer, Donald Erb, George Tsontakis, and Randy Woolf. Primarily interested in a synthesis of musical archetypes, Schwartz is always at work on a variety of genre bending projects. Formative influences include an amalgamation of the glam metal of the late 80's, and the baroque intellectualism of Arnold Schoenberg.
His music has been performed at various venues throughout New York City, from The Knitting Factory to Merkin Concert Hall, as well as such far flung places as Bucharest, Romania and Thunder Bay, Ontario. He has received awards and grants from Meet the Composer, ASCAP, The Society for New Music, The Puffin Foundation, The Cleveland Chamber Symphony, and The Ohio Federation of College Music Clubs. Schwartz has served on the faculties of New York University, Hunter College, and the Lucy Moses Music School, and is the artistic director of the Brooklyn, NY based experimental music group Forecast Music (forecastmusic.org). He was appointed Resident Composer for the Los Angeles based Tonoi contemporary music ensemble's 2007-2008 season. His debut CD "24 Ways of Looking at a Piano", named one of the top classical CDs of 2005 by All Music Guide, is available now from Centaur Records (http://www.centaurrecords.com). His music is also available on Capstone Records, and Trace Label (France), and is published by Staunch Music (UK) and Lovebird Music (US).
Following a wonderful, rewarding decade in NYC, Schwartz has recently taken a position at the University of North Carolina School for the Arts, and is in the process of relocating to lovely NC.

Eric Schwartz - On and On

"Keep Your Jesus Off My Penis" - Eric Schwartz Live @ the PinChurch

Senator Whoever - Official Video by Eric Schwartz
▶ View All Videos