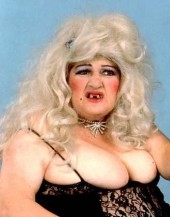 Location:
Baltimore, US
Type:
Artist / Band / Musician
Genre:
Comedy
Label:
Unknown
Type:
Indie
Bio
Edith Massey (known to her friends as "Edie") was born in 1918. Raised in an orphanage until she was sent out to be a maid at the age of fifteen, Edith finally got fed up and ran away, but was captured by police and put in a reformatory. After serving her sentence, she hitchhiked to L.A. and started selling pencils and combs. She ended up working as a tap dancer in a strip club, got bored, and hopped a freight train to San Francisco to become a B-Girl. In 1946 Edith married a soldier in Reno and claims it was the happiest day of her life. The marriage lasted about five years until Edith left him because she got restless. Edith hitchhiked her way across America, taking jobs in bars. In Chicago she was even the Madam of a brothel.

Edith relocated to Baltimore when police "started chasing us B-Girls out". Edith got a job in Pete’s Motel, a waterfront bar. This is where she first met John Waters who cast her in Multiple Maniacs (1970). After this, Edith opened a Thrift Shop where she enjoyed good business for many years. Edith also appeared as The Egg Lady (Pink Flamingos, 1972) Aunt Ida (Female Trouble, 1974), Queen Carlotta (Desperate Living, 1977) and as Cuddles (Polyester, 1980). She also made ends meet by modelling for a greetings card company and releasing a punk record in 1977 "Hey Punks, Get off the Grass!" which, backed with a cover of "Big Girls Don’t Cry" was a modest success. Edith moved to California in later life and sadly died of cancer in 1984, surrounded by family, friends and fans.

the Edith Massey - I Like What I See (alt rehearsal)