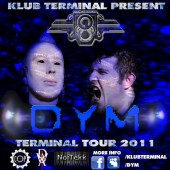 Black Rain has gone crazy! Never believed that there will ever be a Christmas
compilation with Electro- and Gothic-tracks? Here it is! "Black Snow" - the
ultimate but completely different Black Rain Label Group Christmas/Yule
compilation! 16 songs - rocking and crazy - contemplative and funny - all mixed
up in one unique melange of Dark Wave, Industrial and Electro sounds. All bands
contributed nothing but great songs - cover version from the 1940's and 50's ("I
Want a Hippopotamus for Christmas" - Dandelion Wine, "Tausend Sterne sind ein
Dom" - Plane To Pia) - folk songs ("Hava Nagila" - Hioctan, "Little Drummer Boy"
- DYM) and a lot of exclusive compositions ("xparty" - Jabberwock, "Wintergedanken"
- Feindflug, "A Wish" - The Pussybats). You don't believe that this will work?
Just get the CD and be surprised! The compilation will be released at November
the 20th, you can pre-order the CD in our Webshop www.emmo.biz right now.

Longly anticipated by their fans for a full length release and newly recruited by NoiTekk: DYM's "The Invilid" features a unique enigmatic design of aggressively club anthem like ebm synths, and harsh vocals which are well known and
favorite characteristics from the label's ranks. DYM has interfused this with a never before heard breakcore influenced rapid fire style percussion, glitching and abrasive editing. Lyrically DYM expresses their own opinions from current events, society's idiosyncrasies, control, and unsatisfactory conditions. This also reflects their purpose which was from day 1, to bring forth a new approach to the standard industrial sound. Stand alone, state of the art, heavily distorted, yet sharply precise total control over their technology DYM will lead the Hellectro scene to it's next level by bringing new influences to the genre.
purchase cd at : (North America) Cop International
,
Storming The Base
(Europe)
Black Rain
purchase download at:
iTunes,

2001: DYM (Death to Your Modern) begins as an electro/industrial
project. Influenced by old-school industrial acts such as Skinny
Puppy, Throbbing Gristle, and Frontline Assembly, (E-N) conceives DYM.
2002: At the start of the year, three of DYM's tracks hit the internet, and the band's popularity first begins to swell. DYM holds the top 3 slot on the mp3.com Canadian Industrial chart, and gains international acclaim with their lo-fi single, "Dirty", as it lands at 23 on the mp3.com World chart.
Late 2003: longtime friend (Arc) joins forces with E-N, and DYM plays their much anticipated first performance in Toronto,
Ontario, Canada. DYM continues to play live, and the band is well received by
Hamilton and Toronto audiences. DYM also finds critical recognition
in the same year: after a mere 3 shows, Alex Veronac of (internationally distributed) Release Magazine names DYM one of "the best electro-industrial newcomers of 2003".
2004: DYM meets 2004 with a series of live performances, headlining shows
in St. Catharines and Kitchener, Ontario, Canada, while also continuing to play to their growing Torontonian fan-base.
In the following year, DYM takes a break from live appearances,
choosing instead to focus on writing and studio work.
Also in 2005: DYM relocates to Toronto.
2006: DYM returns to find that all of their diligent work is about to pay off. In March, DYM clenches the 1 position on the numberonemusic.com industrial chart with their engaging single "Zenologic". Four of DYM's songs remain in the chart's top ten for
three weeks. "Zenologic" gains widespread popularity throughout the industrial
scene, and is remixed several times by other accomplished bands and DJs. Early spring finds the duo playing to a packed audience at the world renowned C.O.M.A. 3 festival in Montreal, Quebec, Canada. In September, DYM wins Caustic's remix contest (artist's choice) with "Give Me Damage". The track appears on Caustic's 2006 release, Give Me Free Handjobs.
2007: DYM is nearing completion of their latest album, The Invilid.
With inspiration from rhythm and noise of acts such as Venetian
Snares and Enduser, The Invilid is set to feature an enigmatic design of aggressive ebm synths, interfused with an influence of breakcore percussion and 'glitching'. Nick Gorman (of Fractured - Dependant Records) co-produces.
2008: DYM signs with Noitekk and released through Cop International in north America - "The Invilid" released in September.
2009: "The Invilid" appears On Germanys DAC marking DYM's entry onto the international scene and receives a number of great reviews from various magazine, webzines, and forums worldwide (see blog).
During this year DYM played a numbers of live shows to support the Invilid including appearances at north America's biggest industrial music festival, "festival kinetik" in Montréal & the infamous B.E.A.T Crusher in Toronto. In between Live performances EÑ of DYM had been Working hard on a slew of remixes for other bands (Grendel, Acylum, wynardtage, Caustic, Cdrone Defect, Preemptive Strike, C lekktor, and others) as well as preparing a remix version of "the Invilid" to be accompanied by a EP from DYM.
2011: "The Swarm" is released on Noitekk, Cop international, and Death watch Asia. It has been well received around the world with many great reviews 2011 has also been the year of remixes for dym having already completed a a great deal of tracks for VPROJEKT, SIVA SIX, TERROLOKAUST, VIGILANTE, DIE SEKTOR, CEDIGEST, DISTORTED MEMORY, LATEXXX TEENS, THE CRYSTALLINE EFFECT, FRACTURED, DETROIT DIESEL, AND MORE! DYM has also appeared on many compilations this year including but not limited to; Dependence 2011 (A Remix), Stahl Disko, Kinetik Fest Compilation(A Remix), Orkus Comp 71, Direct World Action for Japan, Electro-industrial Infection Vol.01, Zillo CD 03/2011, and more! Dym has also been working hard on a new CD to arrive in the public around late 2011 early 2012

Worms of the earth -

Additional Tracks Appear on but not limited too (I know theres a bunch im
missing!)