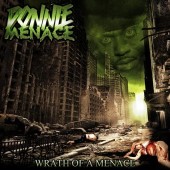 In today’s current state of music, it is hard to find an artist that is one of a kind. The industry machine has polluted every genre of music to a point where originality has been nearly obliterated. Unfortunately the genre of rap and the culture of Hip-Hop has suffered the worst from this situation.

This is where the world of Donnie Menace comes into play, Donnie Menace is a not only just a horror influenced rapper , but a full blown emcee and an artist that takes pride in his craft and refuses to alter his way of self expression for the sake of mainstream mass appeal. Hip-Hop wasn't just a phase that Donnie went through as a pre-teen; he grew up on it and all different genre’s of music since he was able to talk. The first song to Donnie’s memory that got him open to rap was "The Nigga You Love to Hate" by Ice Cube which was being played by his uncle that lived with him and his grandmother in 1990. On top of this he was always drawn to twisted, horrific, and ultra-violent media as a child, long before he knew the existence of the so called Genre of "Horrorcore". Writing twisted and dark humorous rhymes for fun since the age of 9, he finally realized that it was his passion once he hit middle school and discovered the underground rap scene and from there made it his main priority to be the best twisted lyricist he could possibly be.

Menace played his first show at the age of 17 at a local Connecticut based venue called "The Puppet House Theatre" alongside other well known local artists and received an astounding response which lead to more local shows and the first self pressed edition of his first demo titled "The Bloody Bootleg". "The Bloody Bootleg" was sold in 3 different versions at local shows for 2 years and was very well received leading to Donnie getting a respectable fan base/following.

At the age of 19 Donnie relocated to Las Vegas, Nevada to attend college for Audio Production/Music Business and to fix an unstable relationship with his father. During this atmosphere change Menace went through a lot of stages of mental growth ,rage , and depression; but he didn’t allow these issues to stop him from progressing at doing what he felt was the only thing he was good at. Now at the age of 20 Donnie has assembled his First Full Length Release titled "The Threat" which is a mixtape of all the songs he has recorded in the past year and a half. This mixtape may not be very important in the eyes of a typical consumer who sees the over saturated market of mixtape artists, but Menace is determined to break the mold of the traditional current bullshit rap artist and mark his place in the world of Hip-Hop.

For Booking either send a message through this myspace or send an email to d_menace88@yahoo.com

Donnie Menace - The World Is Sick.

Donnie Menace - Wrath Of A Menace.