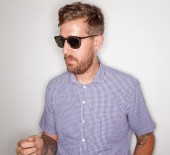 Tag(s):
DJ
Location:
California, US
Type:
Artist / Band / Musician
Genre:
Alternative / Hyphy / Club
Site(s):
Site
Label:
For All Bookings please contact Matt@Dimmak.com
BioConnections
DJ AM
Steve Aoki
boom bip
Brother Reade
PASE ROCK
Tittsworth
Paul Devro
Cosmo Baker
Nick Catchdubs
DAN OH
DJ Morse Code
Antimc
Desert Eagles
Jason Stewart, better known to the world as Them Jeans, is a rare mix of diverse interests and unforgettable presence (he is 6 ft. 8 inches tall after all!). To categorize him as merely another DJ/producer would be to understate his drive and contributions to the current musical landscape in Los Angeles and increasing influence in the global music community.
He has been the driving force behind world famous club night Dim Mak Tuesdays at Cinespace for over five years as both a DJ and promoter, helping to showcase acts as eclectic and renown as Justice, Lady Gaga, and Kid Cudi. His well thought out, genre-bending sets (spanning from house music to southern rap) have recently seen him gaining recognition from publications such as URB, Vapors, and XLR8R, while expanding his fan base through recent touring throughout North America and Europe.
Not content with just furthering his musical craft, Jason continues to pursue his other passions in life which include an uncanny knowledge of food showcased through diehard Twittering, continued work as a talented graphic designer who produces much of the artwork for his own releases and events, and currently has a line of jeans in collaboration with clothing company, GRNapppletree.
However, at the forefront of all of this is his relentless work on new and distinct musical creations. Them Jeans’s passion for a wide array of genres and sounds has found its way into his productions in truly innovative ways. It would be difficult to find another artist out there who can credit remixes by Diddy, Soulja Boy, We Have Band, and Munk to their repertoire and have it all fit perfectly.
While they may seem disparate, all of his music shares a genuine belief in crafting one-of-a-kind listening experiences that look toward challenging people’s perception of mainstream music and blurring the line between dance music and every other genre imaginable.
Alongside the aforementioned remixes due out later this year, popular bootleg remixes done for the XX, the Yeah Yeah Yeah’s, and Major Lazer are garnering national attention and radio play. Them Jeans is keeping on his prolific creative pace with an original EP of uniquely crafted house music due out in early 2010 and a sea of original music that should only help to solidify him as an artist not to be ignored.

Them Jeans - Git It (Kolombo Remix)

When She Puts On Them Jeans - JJ Lawhorn Lyrics

Ginuwine- In Those Jeans Lyrical Video
▶ View All Videos