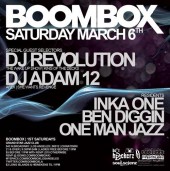 For Email Marketing you can trust

As one of the most well known and respected Djs across the globe, DJ Revolution has been holding down the two Technics on the longest running commercial hip hop show in history for 8 years now. The Wake Up Show, with hosts Sway (MTV) and King Tech is an internationally syndicated hip hop mix show that has helped launch the careers of some of the biggest and brightest including Eminem, Xzbit, Common, and countless others. The show even experienced a brief run as a show on MTV, adding visual images and faces to the world famous radio trio. However, Exposing quality hip hop to millions of people while displaying his unquestionable skill is just part of DJ Revs resume.

Aside from his weekly DJ and production duties on the radio show based out of Power 106 in Los Angeles, he has lent his now infamous scratch techniques and production skills to many artists, established and up and coming alike. Dilated Peoples, Canibus, Chino XL, Tha Alkaholiks, Mystic, Bootcamp Click and many more have all witnessed the turntable wizardry or pounding beats that Revolution brings to the table. He has released too many mixtapes to name. Most recently, the first installment in a series of 20 volumes, class of 85 has received incredible feedback. He has also taken his skills to the far corners of the world and ripped clubs all over Europe, Asia and Australia/New Zealand. This of course includes traveling the US and Canada to spin with the likes of the legendary Jazzy Jeff, DJ Premier and Maseo from De La Soul and headline clubs himself. Revolution has also been featured in many respected magazines such as The Source, The Source France, XXL, Fader, Vibe, Elemental, XLR8R, Urb, Blast, Juice, and many other national, international and local publications. Recently he was interviewed in the Washington post express. Captions, interviews and miscellaneous video footage of him can be found on websites all over the internet as well.

Dj Rev has also released 2 solo full length Lps that garnered him critical acclaim (in 12s we trust and R2K) and a collaboration with his partners Sway & tech on interscope in 99. Aside from planning to release two more full lengths in 07, rev has also begun lending his production to film and TV. Working with MTV, VH1, ESPN among others, as well as freelancing custom work for independent film makers. He got the bug in 97 when he scored the Jet Li cult classic movie Black Mask.

But in the end, no matter how involved in the business of being Hip Hop DJ Revolution becomes he will always be most comfortable standing behind two 1200s.

DJ Revolution is now preparing for his new album on Duck Down Records entitled “King Of The Decks” featuring some of the brightest artists in Hip Hop. The album is in stores now!!!

Inside the Motown Party with Dj Reverend P at Djoon