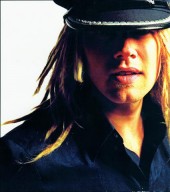 "All My Life" was featured on the Tuesday October 23rd episode of House on the FOX network.

"All My Life" is from DJ Harry's full length album, Collision, on SCI Fidelity Records. Both the track and complete album are available on iTunes or any major music retailer.

Thesaurus, written and performed by DJ Harry and d.w.box, is available now on Black Bridge Records

Harrys recent release, Collision, received glowing press in URB, Remix, XLR8R, BPM, Relix and peaked at 3 on the CMJ RPM Chart. The first single from the album, All My Life, crossed over nationally to commercial radio and was ranked 3 in the US for its add week at Triple A Radio.

All My Life can be heard on Sirius (Chill Channel) and has appeared on House (FOX), The OC (FOX), Moonlight (CBS), Veronica Mars (UPN), Wildfire (ABC), Kyle XY (ABC), Who Killed the Electric Car (Sony Pictures), and various independent films and documentaries.

DJ Harry is named in URB Magazine's The Next 100.

Whimsical - Space is the Place