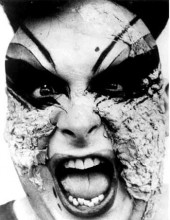 Location:
Baltimore, US
Type:
Artist / Band / Musician
Genre:
Pop
Label:
Various Labels
Type:
Major
BioConnections
Edith Massey
Glenn Milstead was born on the 19th of October 1945 in Baltimore. After a troubled childhood, Glenn began to do drag and even turned up to the school Halloween party dressed as Elizabeth Taylor. One day he was introduced by a friend to John Waters, one of the "stoner" crowd and an underground film maker. After striking up a friendship Glenn began to appear in Waters films and suddenly DIVINE WAS BORN!!!

With the help of starring roles in several films including "Multiple Maniacs" (1970), "Pink Flamingos" (1972, in which he famously ate actual dog faeces) and "Female Trouble" (1974, Divine's shining moment). Cult stardom quickly followed and he became an internationally famous figure (Divine once turned up to a lavish showbiz party wearing the same expensive cocktail dress as Jackie Kennedy Onassis). Divine also made appearances in two sell out off Broadway shows in the mid to late seventies "Women Behind Bars" and "The Neon Woman".

In the late seventies and early eighties he began a pop career, working with cult dance producer Bobby Orlando. He enjoyed several cult hits including "Native Love", "Shoot Your Shot" and "Love Reaction". He also worked throughout the mid to late eighties with the pop production powerhouse Stock, Aitken and Waterman. And in 1984 even had a top twenty hit (and a controversial appearance on top of the pops) with possibly his best single "You Think You're a Man".

Divine would re-team with John Waters after a gap of seven years in 1988 to appear in the film "Hairspray" alongside Ricki Lake and Deborah Harry. Tragically however Divine died of illness linked to his obesity shortly after the film was released to rave reviews. "Hairspray" had endeared Divine to a new legion of adoring fans and given him the mainstream success he craved. Which makes his loss to all of us all the sadder.

Fire In The Booth - Divine