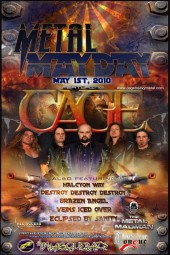 Epic thrashers Destroy Destroy Destroy have shared the stage with many national acts such as Dying Fetus, Origin, Exodus, Overkill, Bleeding Through, The Red Chord, Mastodon, Himsa, The Showdown, Pelican, Cryptopsy, Death by Stereo, Every Time I Die, Converge, High On Fire, Darkest Hour, Municipal Waste, The Tony Danza Tapdance Extravaganza, and many other reigning metal bands from the south.

BOOKING INFORMATION: We currently do not have a booking agent so contact us on this page for all booking inquiries