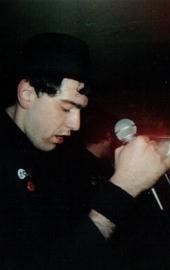 Location:
New York City, New York, US
Type:
Artist / Band / Musician
Genre:
Alternative
Site(s):
Site
Label:
NMG WORLDWIDE
Type:
Major
BioConnections
Plexi 3
Daily Void
Fashion! Fashion! and the Image Boys
Guinea Worms
"DUSTY BIBLES LEAD TO DIRTY LIVES"DEREK LYN PLASTIC/PLASTIC SURGERY 7"- PLASTIC SURGERY conjures up post-apocalyptic images of neon-lit back alleys and light-saber switchblades, with it's hopeless bad-boy romanticism vibe set to twitching keys and guitar fuzz.The sound is catchy enough to be placed alongside any of today's most notable punk-pop.Casual fans of this genre might just find a new favorite mad scientist in DEREK LYN PLASTIC. (MAXIMUM ROCK N' ROLL)
DEREK LYN PLASTIC/PLASTIC SURGERY 7"-I do believe it's more of a spontaneous generation than an empty trend--new wave smacked on the jagged boulders of garage rock, exploding in a bounty of once-buried treasure.Science experiments gone wrong,psychosis being wrestled with, and dirty electronics used as percussion instruments and then caressed back into a melody.The best of all,the songs are thickly spined and muscled into form by solid songwriting instead of mere shtick.In turn this reminds me of Gary Numan,Joy Division.Good stuff.(RAZORCAKE)DEREK LYN PLASTIC/SHE'S GOT A U.T.I. 7"-Who would have thunk a 7-inch EP with a title like She's Got a U.T.I. would show off major artistic growth for Derek Lyn Plastic? Believe it.
The four songs that make up the latest release from Atlanta's burgeoning icon of discomfort are cut from the same vampy and paranoid cloth of synth-driven punk jams that made his previous singles so addictive. But there's an added level of precision and intensity in his delivery that makes it clear Mr. Plastic isn't just working out his social demons for the sake of it.
An air of refinement surrounds the tight drum roll and warped power chords that kick off the record's opening number, "Swim." The song constricts over hard and abrasive layers of wide-eyed guitar assaults and barked lyrical mantras. The balance of blurted sneers and oppressively distorted screams tussles in a back and forth of psychotic tension and heart-pumping amplitude.
The title track clocks in at just more than three minutes, making it Plastic's longest song to date. The blackened strain of '80s trash-punk worship that binds it together feels like less of an aesthetic choice than a lifestyle choice. When he utters the chorus "she can feel that," he's feeling it, too, but on a much more reactionary and existential level.
The record oozes with the catharsis and flippancy of a musician whose brightest moments are inspired by life's most unpleasant speed bumps. "Let's Get High" is the supercharged closer that grinds like a sped-up Motörhead anthem.
These four songs don't diverge too far from Plastic's already-established sound, but show he's not content staying still for too long. With She's Got a U.T.I., Plastic pays attention to the art of the song in a way that transcends his previous direction without sacrificing his spontaneity and pure, punk-rock (CREATIVE LOAFING)