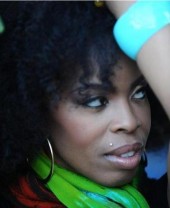 Location:
Los Angeles, California, US
Type:
Artist / Band / Musician
Genre:
Pop / Soul / Christian
Site(s):
Site
BioConnections
Leona Lewis
a fine frenzy
Matt Cusson
Ledisi
ASCAP
Kenya Hathaway
FISH
Acoustic Cordiale
Herman Jackson
Chris Johnson©
Born in Cincinnati, Ohio, DeeDee Foster comes from a musical family. DeeDee graduated from the Performing Arts High School in Cincinnati, and was awarded a vocal scholarship to attend Central State University in Wilberforce, Ohio, where she received a B.S. in Music Education. DeeDee decided to move to Los Angeles to pursue her singing career, once there she has been privileged to sing behind some of the best in the business. DeeDee has shared the stage with such artists as: Anastacia, Mary J. Blige, Stevie Wonder, Celine Dion, Chaka Khan, Jennifer Hudson, and many others. DeeDee is currently in the process of releasing her first solo project, where she has co-written and co-produced all of the material. DeeDee's music has been described as, "alternative-pop, acoustic melodic,soul,"

All that know her say that she is a great person to work with, be around, and an awesome talent. Her voice is pretty, rich, and creamy with a beautiful warm tone. Award winning producer Ashley Ingram describes her voice as having, "sunshine" in it. Anastacia said that DeeDee has one of the "prettiest voices she has ever heard,"and Grammy award winning sound engineer, Anne Catalino said, "DeeDee is one of the most professional and fastest vocalists she's ever worked with."

"I wanted to do a project that you would love to listen to and that would put a smile on your face. I know the kind of music that makes me smile and that's what I wanted to do with my music. When I'm on stage, it's like therapy, and that's what helps me to make it, and I just hope that I will be a blessing and encourage others along the way."

Hey everybody, I did an interview with Treazure magazine and I wanted you guys to check it out.

I know I have some true DeeDee Fans that would love to support me. hehehe :-)

Let me know what you think, and if you would like, leave a comment about the interview on the Treazure website. I really want to thank the people over at Treazure Magazine that were interested in hearing my story. you ladies are awesome.

go to this link

DeeDee Foster - Best That I Can (Official Music Video)

DeeDee Foster- "Be With You"

Dee Dee Foster Best I Can

deedee foster - best i can

deedee foster - why
▶ View All Videos