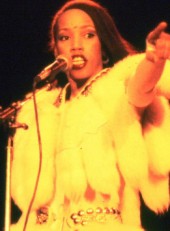 Location:
SACRAMENTO, California, US
Type:
Artist / Band / Musician
Genre:
Funk / Rock / R&B
Site(s):
Site
Label:
JDC Records DSilvasounds
Type:
Indie
BioConnections
Alicia Keys
Mary J. Blige
Bob Marley
Missy Elliott
Tyrese
Musiq Soulchild
Joss Stone
Erykah Badu
Jill Scott
Whitney Houston
Gaelle
Bootsy Collins
Nate Kizerian
Fishbone
Amp Fiddler
TM Stevens
Tiki Fulwood
Starr Cullars
Cordell (Boogie) Mosson
Stevie Pannell
Belita Woods (The Voice)
Funk Archives
Gail Muldrow Rockin Blues Band
Greg Errico
Jerry Martini
A funk diva of epic proportions, Sacramento, CA-born Dawn Silva's musical voyage began far from her association with George Clinton's P-Funk empire, singing songs in the vein of early '70s Top 40 as a part of Windsong, a high school group led by Silva and her sister. Coming into the Sly Stone camp in 1975, Silva made her recorded debut singing backing vocals on Stone's High on You LP. Sticking with the band, she hit the road in 1976, appearing alongside Stone's cousin Lynn Mabry with the Family Stone when they toured as special guests on P-Funk's fall U.S. tour. At seemingly loose ends when Stone himself dropped out of the outing after just a handful of dates, Silva accepted George Clinton's offer to join his band instead and the same offer was also extended to Mabry. The pair made their debut in the Clinton empire during the then ongoing sessions for debut recordings by Funkadelic/Parliament offshoots the Horny Horns (the "Get Up on the Down Stroke" single) and Eddie Hazel (the album Games, Dames & Guitar Thangs). Silva would remain an integral member of the P-Funk family for the next seven years, contributing memorable vocals to both live and recorded performances. She is especially impressive on 1977's hit LP Funkentelechy Vs.

the Placebo System, the set that spawned "Flashlight," a song that remains one of the best-loved Clinton songs, period. While Clinton appreciated having the electrifying pairing of Silva and Mabry in the background, he had other things in mind for them: a new band of their own, the Brides of Funkenstein. Silva herself learned of this unexpected development a mere week before the Brides were signed to Atlantic. Work immediately began on the fledgling group's debut LP, the duo adding vocals to a selection of instrumental outtakes from both the P-Funk and Bootsy Collins archive. Funk or Walk was released in fall 1978 to critical acclaim, earning the duo a Top 20 R&B hit. Silva would continue with the Brides into the early '80s with near nonstop touring and recording dominating her time throughout the rest of the 1970s and the second Brides LP, Never Buy Texas From a Cowboy, was released in 1979. By the end of the 1970s, however, the P-Funk empire was in chaos and, although the Brides continued to tour, they disbanded shortly after shows in Japan in 1981. Out of that loop, Silva quickly found her footing when she linked up with fellow funkers the Gap Band as they began imbibing their own traditional funk sounds with the electronics of the rock

new wave, a direction the Brides themselves had been moving in and even planning at one stage to tour with Lene Lovich. Initially joining the Gap Band's live revue, Silva made her studio debut with the group on the 1983 The Gap Band V: Jammin' LP. She was also kept quite busy across several collaborations with Roy Ayers, Crystal Waters, and Eurythmics, as well as hip-hop artists Coolio and Ice Cube. When her session work permitted, Silva continued to develop her own material, although an album planned for release through Polygram late in the decade was canceled. Silva disappeared from view for much of the 1990s, returning to the limelight first as a backing vocalist for Bernie Worrell on his U.S. tour. With her sound now as much influenced by contemporary R&B and hip-hop as her own classic funk roots, Silva then re-emerged in 2000 with her first solo album -- and one of the finest funk albums in a decade -- the self-released All My Funky Friends. An immediate success at home, the album also found widespread support in Europe, keeping Silva busy with gigs and festival appearances for much of the next two years. Work began on her second album early in 2002. ~ Amy Hanson, All Music Guide.

Dawn Silva the Daughter of the Dawn Coming Soon!!!

Dawn Silva - Close To You