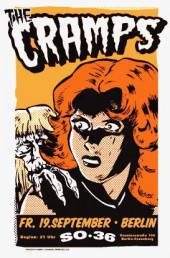 Location:
San Diego, California, US
Type:
Artist / Band / Musician
Genre:
Punk
Label:
Vengeance/I.R.S.
Type:
Indie
Bio
Lux Interior and Poison Ivy met in Sacramento, California in 1972. Due to their common artistic interests and shared devotion to record collecting, they decided to form The Cramps. Lux took his stage name from a car ad, and Ivy claimed to have received hers in a dream (she was first Poison Ivy Rorschach, taking her last name from that of the inventor of the Rorschach inkblot test). They moved in 1973 to Akron, Ohio and then to New York in 1975, soon entering into CBGB's early punk scene with other emerging acts like The Ramones, Patti Smith, and Television.

In the late 1970s, the Cramps performed regularly in New York at places like CBGB's and Max's Kansas City, releasing two indie singles in 1977 before being signed to the young I.R.S. Records label. In June of 1978 they gave a free concert for patients at the California State Mental Hospital in Napa, later released on video as "Live at Napa State Mental Hospital." They released the two singles again on their seminal 1979 Gravest Hits EP, before going back that year to Memphis to record their first full length album, "Songs The Lord Taught Us."After relocating to Los Angeles, Kid Congo Powers of The Gun Club joined the Cramps on guitar. But while recording their second LP, the sublime and oddly subtle "Psychedelic Jungle", the band began to dispute royalties and creative rights. The ensuing court case prevented them from releasing anything until 1983, when they recorded "Smell of Female" live at New York's Peppermint Lounge. With the release of 1986's "A Date With Elvis", the Cramps added a bass guitar to the mix with an increased focus on sexual double entendre.

The Cramps - Songs The Lord Taught Us (Full Album)

The Cramps - Songs the Lord Taught Us - FULL ALBUM