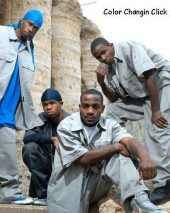 Friends since childhood, Paul and Cham broke into the music industry by doing promotions for various southern hip-hop entities such as Cash Money Records. Eventually, they got jobs doing promotions for Swishahouse. While there, they recorded a demo for Swishahouse that gained a lot of attention, and soon people wanted to know who made it. Paul and Cham kept asking Swishahouse CEO Michael 5000 Watts to let them get a couple of verses on some mixtapes. However, they were constantly put to the side for other artists, and when they did get a chance to perform, they weren't getting paid well. Eventually, Paul and Cham decided to break out on their own and left Swishahouse.

The pair signed with Paid In Full Records, a record label owned by the Madd Hatta, and released Get Ya Mind Correct in 2002. It was an instant hit in Houston, selling over 100,000 copies independently and getting nominated by the Source as one of the finalists for the indie album of the year in 2002.

However, disputes over money and artistic direction led to friction between Paul and Cham. They were set to release their sophomore album, Controversy Sells, but the lingering issues led the group to split before the album saw the light of day. Controversy Sells did eventually get released in 2004, but it felt incomplete; it seemed more like a Chamillionaire solo album due to the fact that Paul was absent on several songs. (Incidentally, Cham has said that he wanted to use that album's name for his major label debut The Sound of Revenge.) Paul decided to return to Swishahouse, while Cham, vowing never to be jerked by the recording industry again, started his own label, Chamillitary Entertainment. His younger brother Rasaq, Yung Ro, and 50/50 Twin are all signed to the label.

Paul and Cham's relationship was further strained by Paul's friendship with Mike Jones. Cham claims that Jones was saying foul things behind his back while being cool with him in person. For Cham's part, he says that he doesn't know if a reconciliation with Paul is forthcoming, stating that they have both grown into different people (although he left the possibility open), but he wants nothing to do with Jones. Actually, Cham did settle his differences with Wall. In Chamillionaire's first mixtape, most of his songs were "dissing" Mike Jones. But not loosely mentioned